This Column Will Change Your Life: Coffee and Creativity 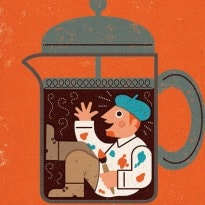 'Coffee slides me into the working day before my procrastinatory urges can kick in: grind beans, brew coffee, pour, sip, open laptop... and I'm working before I've had a chance to protest'

'Delightedly he seized hold of the bag containing the sugar and poured sugar into the coffee cup until it was piled above the rim," writes one biographer of Søren Kierkegaard. "Next came the incredibly strong black coffee, which slowly dissolved the white pyramid." The Danish philosopher was overdoing it: perhaps it's no coincidence that his books include Fear And Trembling and The Sickness Unto Death. But coffee addicts, myself included, relish anecdotes such as this because they reinforce our belief that coffee and creativity are linked. It's not merely that caffeine is the "acceptable addiction", as it's sometimes called; it's something actively to boast about: "Oh, you don't want to meet me before my morning coffee," we say, with something close to pride. Try replacing "coffee" in that sentence with "heroin". The effect isn't quite the same.

So you can imagine the horror provoked by recent suggestions that coffee might actually impair creativity: I nearly spat my coffee over my keyboard in shock. (I didn't really. Nobody ever has. Ever.) The argument, outlined in a review of the recent research by Maria Konnikova in the New Yorker, runs like this. In neurochemical terms, caffeine doesn't "give" you energy; really, it just delays the point at which you feel tired. The resulting mind-state is one of narrow focus and "hyper-vigilance": great for ploughing through predetermined tasks, but poor for the insightful forging of connections between disparate ideas.

"Creative insights and imaginative solutions often occur when we stop working on a particular problem and let our mind move on to something unrelated," Konnikova writes. Focus, caffeine-induced or not, isn't enough. We need the mind-wandering, too.

But must we really cut back on coffee to get it? There's anecdotal evidence to the contrary on almost every page of Mason Currey's new book Daily Rituals: How Artists Work, to be published in the UK in October. That's where I found the Kierkegaard story, one of numerous accounts of spectacularly creative yet coffee-enslaved souls. (Beethoven, Sartre and Mahler were all addicts; Honoré de Balzac crushed coffee beans and ate the powder, though to be fair he also keeled over and died at 51.) One thing these tales illustrate is that it's only partly about the caffeine. My coffee ritual (which involves a burr grinder and a cafetiere) is deeply comforting, even meditative.

Also, it slides me into the working day before my procrastinatory urges can kick in: grind beans, brew coffee, plunge, pour, sip, open laptop... and I'm working before I've had a chance to protest. And mid-morning coffee breaks, alone or with colleagues, are full of mind-wandering. Caffeine may not relax our focus, but getting coffee certainly does.

So I wasn't too surprised to learn, from yet another recent coffee-related study, that modest ambient noise, such as the background buzz of a coffee shop, prompts more creative ideas than quieter settings. There's even a web service that pipes a cafe-style hum into your headphones at your office or at home. Meanwhile, it's been discovered that even if you give people decaf coffee, they'll get sharper at certain tasks - just so long as you tell them they're drinking full-caf. The rituals of coffee, the surroundings in which it's drunk, the beliefs we have about it: they're as potent a brew as the brew itself.

Image: 'Caffeine may not relax our focus, but getting coffee certainly does.' Illustration: Adam Howling for the Guardian