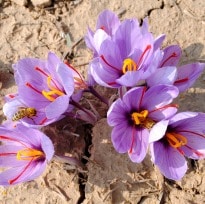 As saffron flowers bloom and farmers begin harvesting the royal spice, the fields in this south Kashmir town are a riot of colour and fragrance these days.

Grown in the well-drained rich soil of the Pampore Highlands and some other places in the Valley, saffron is one of the costliest spices in the world at around Rs.1,500 ($24) per 10 grams.

The best quality saffron comes from Spain and Iran - as also Kashmir. Used as a flavoring and colouring agent in foods, saffron is also used in religious functions. In addition, it is used in perfumes, dyes and medicines. Saffron is also believed to have aphrodisiac properties.

Saffron is a royal spice not just because of its high price but also because local folklore associates its blooming with romance.

The last king of Kashmir, Yusuf Shah, is believed to have visited the saffron fields on a moonlit night to see the magic of the purple flowers in 16th century when he was mesmerized by a lone female voice singing in the wilderness of the vast saffron fields.

The king's heart was smitten by the voice and he sent his courtiers to find out who the singer was. It turned out to be a village woman named Zoon. Yusuf Shah then married Zoon after she divorced her previous husband.

She was christened Habba Khatoun - the queen. Like Noor Jahan was to Mughal emperor Jahangir, Habba Khatoun is believed to have been the most powerful influence in her husband's life.

"Watching the saffron bloom during moonlit nights in early November is something nature lovers never miss. But, for us, the story is not as fortunate as that of either Habba Khatoun or her husband," said saffron farmer Ghulam Muhammad (59).
"The crop yield has been decreasing each year despite the National Saffron Mission announced by the government. Adulterated saffron from other places and the monopoly of the middlemen have made our lives miserable," Muhammad rued.

The central government announced the National Saffron Mission in 2010, earmarking Rs. 373 crore to be spent on the development and improvement of the crop till 2014.

"At the beginning of the mission, Rs.9.50 crore were distributed among saffron growers. Another Rs.8.90 crore has been earmarked for setting up a testing lab for quality control," said a field officer of the state government.

He was hopeful that the yields would increase manifold if the entire 72,000 kanals of land under saffron cultivation in the Valley are brought under the National Saffron Mission. (Eight kanals make up an acre.)

"So far, just 6,500 kanals have been brought under the Mission. Crop yields have definitely improved in these fields," he said.

"But, there are some unseen players who are working against the interests of the growers. Last month ten grams of saffron was priced at Rs.1,500. Today the price has fallen to Rs.1,020 per ten grams.

"Further, the main problem with saffron fields is availability of irrigation. Seventy-two bore wells have been identified under the mission, but so far just one is functional. I am sure when all the required bore wells become functional and the entire cultivable area is brought under the Mission, our production would surpass that of Iran," Wani noted.

The state government's Director (Agriculture) Mushtaq Peerzada said 50 borewells will be activated during 2013-14.

"The directorate of agriculture is duty-bound to facilitate and support the saffron growers by addressing their problems. Many steps will be taken to benefit our farmers," he added.

Promoted
Listen to the latest songs, only on JioSaavn.com
Despite the problems faced by the saffron growers, the magic and mystery of the royal spice is something that has become synonymous with the beauty and grandeur of Kashmir.

The fragrance and colour of the vast saffron fields have over the years fired the imagination of kings, poets and lovers alike. It is a heritage crop Kashmiris have always prided themselves about.