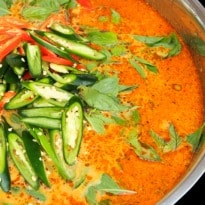 Since childhood, being born in a North Indian Punjabi family, I have been fond of curries - spicy chicken curry or tangy vegetable tangy curry accompanied with rice or a crisp tandoori roti oozing with white butter. Then, there are a plethora of exotic curries such as Kerala's raw mango curry, green or red Thai curry, Indonesian curry or Burmese curry

What, then, is a curry? It is a generic term to denote a wide variety of dishes originating in India, Pakistan, Bangladeshand Thailand and South and Southeast Asian countries. The common feature in curries is the use of more or less complex concoctions of spices and/or herbs.

Curry making is an art. It takes some practice and some deliberation to learn to put together the spices with seasonings and other flavours. Often, the curry label is given to any spicy dish or blend of spices that has an Indian or eastern flavour. Although the ingredients in curries may vary from one to the other, a good thumb rule is that a curry is a dish containing sauted onions, ginger, garlic and varying amounts of spices like turmeric, cumin, coriander, ginger, chili, cloves and fenugreek, among others.

A few days ago, I had an amazing curry made by grinding a coconut, fresh green chili, dried whole red chili and garlic sauted in coconut oil with raw mango and pumpkin, cooked to perfection and finished with coconut milk, jaggary and tamarind juice.

Believe it or not, each ingredient of a curry has a medicinal value. In fact, each of the ingredients have been used for thousand of years to treat a variety of ailments from stomach cramps to throat infections (although some believe curry has caused far more stomach cramps than it has cured). Also be warned: Those of European origin whose stomachs are used to milder cuisine may also experience the laxative side effects of the curry.

Traditionally, spices can be used whole and/or ground; cooked and/or raw. Spices may be added at different intervals during the cooking process to produce different results.

Curries are the inventions of individuals, curry houses and other restaurants to describe the general flavour of this kind of cuisine. For example the chicken tikka massala, which is one of the most hot selling dish in the West today, eventually boils down to being a derivative of the famous butter chicken invented in the kitchens of the Moti Mahal restaurant in India. However, the story of much loved chicken tikka masala does not end but rather marks the start of a new chapter of innovations and inventions.

Because of this phenomenal global demand for curry, hundreds of Indian restaurants serving Indian food have been established world wide. Also ready -to-eat Indian curries and food that was unheard of a few years back is fast emerging as a new mantra in the world-wide kitchens as the 15-year-old globalization effort is bringing rapid changes in the lifestyles of urban societies.

Here are some interesting facts about curry:

Promoted
Listen to the latest songs, only on JioSaavn.com
* At last count, Britain boasted of over 10,000 curry houses.

* November 9 is celebrated in Britain as National Curry Day.

Comments* A firm has developed Find-A-Loo curry which uses whole chillies to get that extra bite to cater to demands for a hotter than the hottest curry. The curry is also called Mother-in-Law's Tongue.