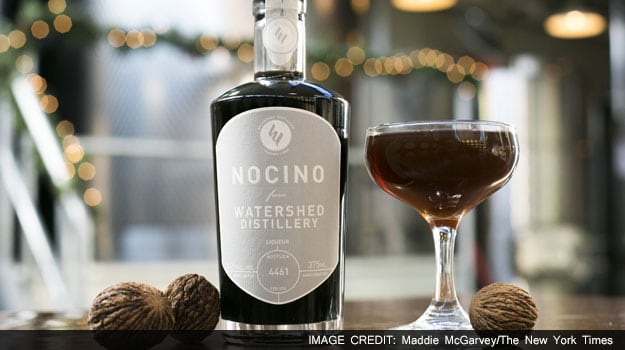 The holidays are shot through with nuts. We stuff them inside our turkeys, cookies and fruitcakes. Without them, decorative nutcrackers are just garish tchotchkes.

Where we don’t expect nuts is in our glasses. But that is easily rectified.

There is arguably no liquor with a more natural Christmas aura than nocino (pronounced no-CHEE-no), a traditional Italian liqueur derived from green, unripe walnuts. It is made from fruit harvested in the spring and is usually ready to drink just in time for the holidays. With its aroma and flavor of baking spices, it even smells like the season.

“I think it’s that richer, warmer profile,” said Ryan Hembree, a co-founder with his wife, Julie, of Skip Rock Distillers in Washington state. “We’ve had people drink it for the first time and say, ‘Oh, my God, that tastes like Christmas.'”

Skip Rock is one of a handful of American craft distillers that have introduced a nocino. The liqueur started as a personal project.

“We had walnut trees that were shading the vegetable garden,” Hembree said. “My wife said, ‘Do something with the walnut trees or cut them down.'” So he searched online for a recipe for nocino, which he had tasted in Italy, and made a batch. Four years ago, Skip Rock produced its first commercial nocino, drawing on other Washingtonians’ backyards.

“We knock on people’s doors and ask to harvest walnuts,” he said.

The story behind the nocino at Watershed Distillery in Columbus, Ohio, has a similar homespun quality. Dave Rigo, a co-founder, was approached by a local physician who had a family recipe for the liqueur. At first, Rigo wasn’t interested in making it.“As a distillery,” he said, “we get a lot of people who come in here who have their homemade products who want us to try them: stragglers with a flask with homemade hooch.”

A taste of the homemade nocino changed his mind. The good doctor wasn’t looking for money; he just didn’t want to let the tradition die, and gave Rigo access to the huge walnut tree in his backyard. Today, Watershed works with two walnut farmers.

Both distilleries make their liqueurs, which are in the 44- to 65-proof range, by chopping the green nuts and steeping them for months in spirit (vodka at Watershed, rum at Skip Rock), along with flavorings like vanilla beans, citrus and spices. Their products are distributed only in certain regions at this point, but a well-stocked liquor store will often carry an Italian brand.

As the liqueur depends on a nut crop, it is seasonal and can be produced only once a year. Just like a certain holiday.