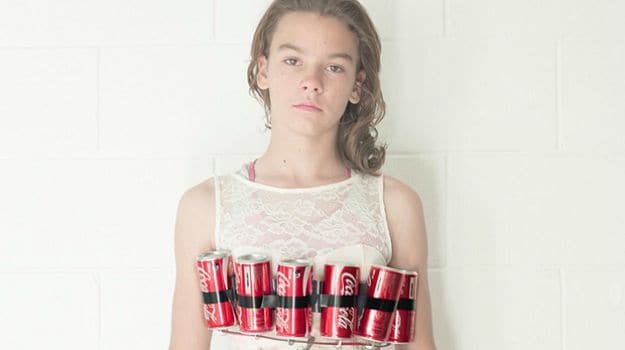 The film-maker’s new exhibition in Melbourne carries a blunt message about health issues facing the next generation of Indigenous kids in Australia.

An Aboriginal boy named Sterling looks down, clutching his chest, which is bare except for the suicide vest of McDonald's take-away containers crudely strapped to it.

His burden is clear; the fast food he consumes has rendered him a ticking time-bomb for disease, and the expression on his face indicates it is a future he believes is inevitable.

A separate, smaller image shows the boy in command of a slingshot, a traditional hunting toy, his arm drawn back and taking aim at the viewer. The power of the gesture is distorted, however, because the image is blurred.

The diptych is part of a series called The Future is Unforgiving by Warwick Thornton, on display at the Anna Schwartz Gallery in Melbourne. Another of the children featured in the exhibition, Luka, is weighed down by the Coke cans strapped to her slight body. In the accompanying image, she holds a "number 7" boomerang, the most deadly of all boomerangs.

For viewers, these contradictory images should be deeply challenging, Schwartz says.

"It looks at the universal simplicity and sweetness and positivity of children, and lays before us what will become of their lives," she said. "It is uncomfortable, because we are all agents in that future."

In her treatise accompanying the exhibition, the chair of Indigenous studies at the University of Melbourne, Professor Marcia Langton, says the potential of the children has been lost. For children like Sterling, his "socialisation is bereft of traditions such as hunting and bereft of the vast knowledge of his traditional estate, environments, fauna and flora, his rightful patrimony", she writes.

Politicians and policy-makers have begun to acknowledge the impact of this loss of heritage and culture on the lives of the first Australians, but Aboriginal people and Torres Strait Islanders continue to bear a disproportionate burden of disease and poor health.

National Heart Foundation's Vicki Wade said at the time of the report launch: "Our communities are forever in mourning for the lives of our young people lost to diseases that can and should be prevented."

The diseases contributing to the majority of these deaths " cardiovascular disease, infant and congenital conditions, gastrointestinal diseases, cancer and diabetes " are largely preventable through diet and other lifestyle factors such as alcohol and tobacco.

Aboriginal and Torres Strait Islanders are three times as likely as non-Indigenous people to have diabetes and high sugar levels, with one in 10 of them suffering from the condition. From the age of just 15, every Aboriginal and Torres Strait Islander in Western Australia's Kimberley region is regarded as being at high risk of developing diabetes.

"I'm getting closer to the end, and I knew I had to start looking after myself and forcibly making sure my dietary requirements were up to scratch," Thornton said.

"People can make up their own mind about the work, there are a lot of ideas in there. But the one that touches my heart and blood pressure and cholesterol is the health issues we're reaping on our children."

The children he used in the exhibition are all related to him, from his home town of Alice Springs in Australia's Northern Territory, 1,500km from the nearest major city. This use of family was important, Thornton says, because of the powerful " and dark " messages they were helping to portray.

"I spoke to them and told them this was fictional, and told them about what I was doing," he said. "Because they are related to me I have ongoing access to them, so if at 15 or 22 they have questions that come up about the works, I can still explain to them the meaning and keep talking to them."

Thornton says he doesn't have the answers to addressing Indigenous disadvantage, or to tackling the abundance of junk foods.

"That's for the experts," he says. But he adds there was a song that ran through his head throughout the three years he dwelled on the project: Make More Spear by Frank Yamma. The song is a call to arms urging a reconnection of Aboriginal people to their traditions of hunting and gathering in order to stop the scourge of disease, poverty, alcohol and drugs on their lives.

"If people want to understand, I would urge them to listen to that song before or while viewing the exhibition," Thornton says.

In 2013, Doyle became the first Indigenous Australian woman to graduate from Oxford University, with a master's of science in evidence-based social intervention. She has spent much of her time working in remote Western Australia, "where they sell lettuce by the leaf and oranges cost $5 ["£3.20] each".

For people in these communities, eating junk food was not merely a lifestyle choice, she said. "People say to drink water from the taps, but some of the water in these communities is not safe to drink, so sugary drinks become a cheap alternative," Doyle says.

"People tell them to give their children two pieces of fruit each day, but if an orange costs $5 and you have four children, that's half your pension packet gone.

"You can't expect people to be broke and have their kids go hungry for the sake of meeting fruit and vegetable quotas. So if a packet of chips costs $1.50, that's what you'll buy."

Doyle said she and her husband would go from community to community, "putting on big feeds for the mobs" out of her own pocket. "Why can't other people with the means do something like that?" she said.

Dr Tim Senior spent a decade working in remote Indigenous communities and continues to specialise in Indigenous health in western Sydney. He said one option would be for governments to subsidise the costs to the major supermarkets of transporting fresh fruit and vegetables thousands of kilometres to remote towns.

In remote locations, food supply is often limited to a general store that is not always open, with a 26% higher price of a basket of food in remote community stores when compared with a Darwin supermarket, the Australian Institute of Family Studies says.

In New South Wales, the Aboriginal community-controlled health services trialled a program where they provided a weekly box of subsidised fruit and vegetables to those on low incomes and found improvements in some indicators of short-term health status among disadvantaged Aboriginal children.

"But funding for that sort of thing is not certain, and it's so short-term," Senior said. "Programs like that need to be done across a generation to be able to show a significant impact."

He also said the impact of intergenerational trauma as a result of the stolen generations " when Aboriginal and Torres Strait Islander children were forcibly removed from their families by the federal and state governments during colonisation " could not be understated.

"Indigenous children learned to gather and prepare food from their grandparents, and that link is cut from the stolen generation, they don't have that knowledge of hunting and gathering passed down to them," he said.

"Instead, they grew up with junk food. Food isn't just a topic of science and nutrition, it's about cultural connection. I think another option to address the health issues being faced by Indigenous communities is to reclaim original food gathering practices, and getting local, small scale agriculture going in those areas where it is possible to do so."

The other "tragedy" facing many Aboriginal and Torres Strait Islanders was that in the most remote areas, they lacked the basic infrastructure for cooking, Senior said.

"To make health food you need electricity, you need cooking facilities, you need water supply. It's just a tragedy that in some communities they don't even have access to safe drinking water, which would be unacceptable in any suburb of Sydney or Melbourne."

One of the first ailments seen in those communities was tooth decay, he said, which made firm fruits and vegetables even harder to eat.

A spokeswoman for Coca-Cola Amatil said the company was working with remote Indigenous community store-owners to help increase the availability and promotion of low- and no-kilojoule drink options in their shops.

This was underway in remote Indigenous communities in the Northern Territory, Queensland, South Australia and Western Australia, she said, and included smaller portion sizes, promotion of low- and no-kilojoule drinks, and increased marketing of the low-calorie Coke Zero and water.

"The challenges facing remote Indigenous communities are both complex and multifactorial," the spokeswoman said.

"As a major beverage provider Coca-Cola Amatil has the potential to contribute to improved outcomes by working with the community to identify, develop and implement effective and sustainable solutions."

A McDonald's spokeswoman said the company was committed to improving the nutritional value of its food by reducing sugar and salt content across the menu and changing to a healthier vegetable oil.

"We will continue to work with government, industry and health professionals to develop ongoing strategies to address community concerns," she said.

Professor Hugh Taylor, an ophthalmologist who began his work with Indigenous communities in 1976, said solutions to the health crisis facing Aboriginal Australians needed to be driven by the communities themselves rather than just dictated to them by corporations and government.

Taylor said he had seen diabetes rates "explode" in Indigenous communities to 50 times what they were when he began his career 40 years ago. He said it was particularly devastating to see Aboriginal children as young as 10 now suffering from type 2 diabetes.

"The reason for it may be partly hereditive and due to changes in exercise, but the big change driving this is food, the readily available, easy accessibly junk food, the deep-fried chicken, the Coke, the bags of potato chips," he said.

Throughout his career he has screened more than 60,000 Indigenous Australians for trachoma " Australia is the only developed country in the world where blinding trachoma still exists.

Taylor praised Thornton for using his art to send a strong message about the havoc diet was wreaking on the lives of Indigenous people.

"Indigenous people have a better feeling of what messages will have an impact than we do," he said.