Kashmiri Dishes That Are Fast Disappearing From the Valley 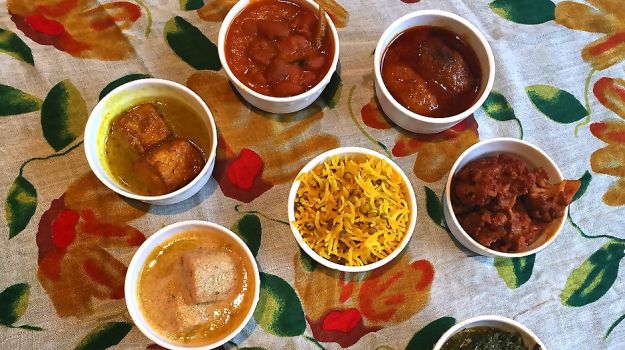 Highlights
I married my Kashmiri husband twenty-five years ago. When our entire family settles down to talk about the ‘old days’, meaning around 45 years ago when my husband and his siblings were children, it is almost as if they refer to a different place.

For one, our daily meals at home revolve around rice, the staple, twice a day. Accompanying it is mutton, usually cooked either with a vegetable or with dal. Yes. In the same dish. It tastes better that way. Hence, tomatoes and mutton, onions and mutton, green peas and mutton, cauliflower and mutton and so on. However, until the 1970s, every household in the Valley tried to cook foods that were less expensive and required more pre-preparation. As a result, the sheep was divided into two parts: the head, all the innards and the trotters. The rest – what most of us think of when we say ‘meat’ – is the other, more expensive part. Up until 40 years ago, there was no shame in admitting to cooking trotters or the hard-to-get-to meat from the head of the sheep or even the thick membrane that encases the entire head of the animal. Today, with prosperity in the cities and towns of Kashmir and more nuclear families with fewer ladies to prepare painstaking dishes, expensive cuts of meat are now the norm.

When my husband was born, he was reportedly, severely underweight. By the time he had to be administered the BCG vaccine, the family decided to offer a thanksgiving of ‘kondour’, a concept that has died out completely, at least in the towns. The term itself refers to a single-serve bowl made of terra cotta. They used to be bought by the dozen, from potters who were fairly common in those days. Each was filled with a selection of home-cooked dishes, mainly vegetarian, arranged around a bed of rice and distributed either to neighbours or to poor folk who congregated in mosques or shrines. You could expect one generous chunk of paneer  cooked with tomatoes, moong dal with lotus stem, a quarter of a quince cooked in spicy gravy and a generous slice of turnip – a favourite root vegetable. The remarkable thing is that no meat at all entered the equation: it was usually a vegetables and dal only platter and those who received it, did so with boundless enthusiasm.

It is the same with something called ‘tchaap maaz’, made, as far as I can tell, only in Ganz Khod, the little alley of Srinagar’s Old City in which my husband’s maternal grandparents lived. It was the alley of sheepskin curers who did a side business of making sausages using the sheep gut as casing and chopped entrails as the filling. Excuse me if it sounds less than felicitous, but people of my husband’s generation look back with great nostalgia at what was essentially a step up from plain old vegetables but lower down the ladder than meat. Over the last 25 years, we have made several trips to Ganz Khod to entreat, plead, beg, bribe, cajole and threaten the families of the skin curers to make tchaap maaz for us, but they are either unable or unwilling to do so.

Promoted
Listen to the latest songs, only on JioSaavn.com
The other dish that is certain to die out with my husband’s ailing grandmother is ‘kaleeng’ – the thick membrane that covers the sheep’s head, skull and all. Apparently, Grandma used to lightly roast the skin over glowing charcoal to burn off any unwanted bits. Then the pieces would be chopped coarsely and set to cook with spices and minimal liquid over a low fire for hours. The gelatinous nature of the membrane would develop on low heat – surely the forerunner of sous-vide cooking! And the finished product makes the entire Reshii clan sigh with remembrance.

Often, when cultures lose certain foods, it is for the most unexpected reasons. We don’t think of higher infant mortality and all-weather roads for the loss of food culture, but it is the latter why Kashmir has lost a vital component of its cooking. The loss is all ours.