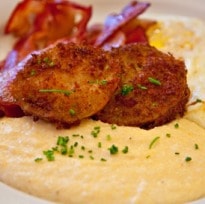 A state-by-state analysis of the food-related words that Americans post on Twitter reveals some interesting trends about diet and health. Who knew that durian fruit was popular in Maine or flan on North Dakota?

One of the most common criticisms of Twitter is that it is really just a bunch of people talking about what they had for lunch. And while this may well be true, it's worth considering that what you had for lunch actually says rather a lot about you. In fact, tweeting about lunch rather than breakfast or brunch or dinner reveals something about where you're likely to live, how you probably vote, what you weigh and your chances of getting diabetes.

Over an eight-month period up to May this year, researchers at the University of Arizona analysed more than three million food-related posts (pdf) made by American tweeters, and found that not only did the importance of each daily meal differ across the country (the Midwest goes for breakfast; the West Coast likes dinner), they were also able to identify the most popular food-related words in each state: flan, for instance, in North Dakota, capers in Oregon, potatoes (not wholly surprisingly) in Idaho.

The diversity of favourite foods across the 50 states is striking. There are a couple of recurrent dishes - sauerkraut is the most popular food hashtag in both Wisconsin and Nevada, succotash a hit in Missouri and Rhode Island, and a vast swath of grits through the Southern states (as well as token northern appearances in Michigan and Pennsylvania and the disputed state of Maryland) is broken only by Mississippi's fondness for tangerines. But there were still plenty of curveballs. How to fathom the popularity of the durian in Maine or the guava in DC? Why does Wyoming go a bundle for watercress, Iowa for cloves, or Alaska for tarragon?

The study went in further still, identifying popular food hashtags for cities such as Austin (tacos, bottomless mimosas) and Chicago (jerk, breakfast, BBQ). Furthermore it was possible to identify migration patterns via the spread of, say, Latin American or Vietnamese foods across the States.

Considering the tweeters' location, as well as the language around favoured ingredients, meals and restaurants allowed the researchers to extrapolate further: a preserves-hashtagging Tweeter in West Virginia for instance, has a high probability of being overweight - after all, 33.5% of West Virginia's population is obese. In vinegar-loving Colorado, meanwhile, obesity rates are the lowest in the nation at 18.7% of the population.

Diabetes sufferers are also more likely to tweet about Mexican and fried food or bacon, while the non-diabetic go all out for Turkish food, chicken and dessert. And while Democrats tweet about vegan food, brunch and the deli counter, the more popular food-related words for Republicans were lunch, snack and party.

It's interesting to see some of our traditional associations debunked: while we connect Florida with oranges, or Georgia with their peaches, they're both all about the grits. And while New York might make us think of bagels or cheesecake or hot dogs, the most popular food tag there across those eight months was "prune" But it's worth noting in a city obsessed with eating out that Prune is also the name of a popular restaurant.

It's hard not to wonder what an equivalent study of the UK might reveal. Would Lancashire be all about hotpot and pie crusts? Would Yorkshire hashtag its parkin and York Fruits? Or would it throw us some surprises too: a taste for cobnuts in Tyne and Wear, say, or a liking for nori in Mid Glamorgan? Would any of us be talking about grits and succotash?