Why Do We Judge People by the Food They Eat? 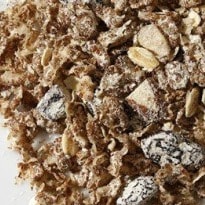 Guardian-reading muesli-eater or tortilla chip-crunching perfectionist? Can the food we like tell others about our personalities?

Back in the day, there was a popular stereotype of the Guardian reader as a sandal-wearing muesli eater. I think we're beyond all that now, so I can get away with admitting that I am big muesli fan. It's pretty rock'n'roll, actually. The Grateful Dead are putting it (well, granola, which is muesli cooked in sugar) in their new beer. I'm the sort of person who gets excited leafing through Rachel Khoo's new muesli book. Her ginger and plum compote looks like a fine way to jazz up breakfast.

Her book has brought to mind a mortifying, muesli-related memory. I have been mixing my own muesli for years, and when I first discovered that my boyfriend also made his own muesli, I was so excited that I breathlessly texted a friend to share the good news. Except, of course, lost in mid swoon, I sent the text to the boy. Luckily this seemed to endear me to him, so all ended well, but it got me thinking about how we make judgments about people based on their eating habits.

The foodie judge and jury

The comments threads on Word of Mouth are full of food-based profiling. A recent article about Dairy Milk, for example, saw more than one person filing those who refrigerate their chocolate under "food philistine". People make statements about themselves, intentionally or otherwise, via the medium of food foibles. I was recently at a tapas bar with some macho foodies who made a big show of crunching the heads off their prawns. I felt rather exposed as squeamish, hoping no one would notice me sliding mine back on the plate. (I'm sure they're delicious, but I'm not ready to overlook the grey goo. Make of that what you will.)

Food likes are so personal that it can feel like quite an attack when someone disses your food. I once told a friend about an amazing salad I had made, and got the oddly angry response that it was "garbage salad". He then launched into a self-righteous monologue about the joys of a single tomato with a little salt. I was floored. I can savour a single tomato, too. But, come on, sometimes I like combinations of flavours and textures.

A bone fide smell and taste scientist by the name of Dr Alan Hirsch has asked more than 19,000 people about their food preferences while also conducting some well-established personality tests on them to find out if certain kinds of people prefer certain kinds of foods, and he has found plenty of correlations. Vindication, at last, for people everywhere who make sweeping generalisations based on what people like to eat.

But I find it hard to take Hirsch's findings seriously. This is possibly because his book on the subject gives dating compatibility tips based upon food likes (although I did read an interview with the racing driver Jenson Button in which it seemed that the main thing he had in common with his girlfriend was a love of pizza, so who am I to scoff?) Perhaps we all instinctively know this stuff and judge accordingly. Hirsch has done a lot of work on ice-cream flavours, the most recent of which was published this summer and was sponsored by Baskin Robbins. All those vanilla fans out there: you're impulsive idealists, am I right? Mint choc chip: frugal, cautious and argumentative, yes? Chocolate? Why, you're dramatic, lively, charming, flirtatious, seductive and gullible. Other interesting titbits are that perfectionists are partial to tortilla chips and spicy food, while people who dig sweet and salty combinations are often creative loners.

I think the way that I decode people's food likes is more to do with making associations with what they eat. So, when I learned about the boy's muesli habits, I thought here is a young man who clearly keeps a weather eye on his health, is capable in the kitchen, who won't be spoon-fed over-sugared cereals produced by multinationals. I thought he was probably a Guardian reader too. Oh.

Do you ever make judgments about people based on what they eat?

Photo: Muesli-eaters of the world unite: but are we always right in our assumptions about people? Photograph: David Levene for the Guardian