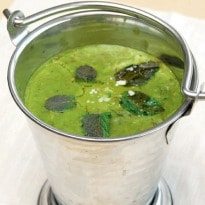 Kalyani Nagar seems to be the hotspot for new Indian vegetarian restaurants. Green Fields is the fourth major veg fine-dine in the neighbourhood. It has food that leaves you fulfilled (nothing ecstatic about it), service that is well-paced and proficient, an air-conditioned, comfortable ambience that gives you the satisfaction of having dined out and prices that don't cause any stress at all.

Of course, Green Fields doesn't restrict themselves to only South Indian snacks and Punjabi fare. No restaurant within their category does so anymore. There are pastas and pizzas and Indian-Chinese in all its glory.

Yet, they have kept the menu basic; it doesn't run into endless lists that mostly all end up tasting the same. We chose to stick to their core competency of Punjabi fare -- with a Chinese starter thrown in.

So, our Mushroom Kalimirch (Rs 105) competed with the Golden Fried Wantons (Rs 88). The wantons were dutifully golden fried thereby passing the test of fresh oil being used in the kitchen. Their crisp exterior left us crackle-happy and uncaring about the tiny julienned veggies stuffed in. But the tandoored mushrooms won the flavour-test. Their crisp, pepper-studded coating and juicy bite, made them some of the best mushroom tikkas we have had in a long time. Plus, it was a hearty portion as well.Ditto the mains. Our Dum Aloo Punjabi (Rs 99) was a fat potato stuffed with tiny cubed veggies, sitting in a red, creamy gravy. Nothing spectacular about this dish but it tasted wholesome with our sesame-crusted Butter Kulcha (Rs 44).

No Indian meal is complete without dal-chawal, so we ordered for it. What came was a Lemon Rice (Rs 77) that had slivers of bright yellow lemons shimmering on its pale yellow base but no tang in them. It was accompanied by a yellow-green Dal Hariyali (Rs 88) that looked like dappled sunlight on a bed of rice. Simmered with garlic, fresh mint and of course, spinach, this was one healthy, happy bowl of lentils.

Listen to the latest songs, only on JioSaavn.com
Of course, they had the regular ice-cream / Mastani dessert range but we opted for the Chocolate Paan at the guy around the next corner. None of our dishes cross the Rs 100 mark and we were presented a bill that made us smile, which is a rarity. If Green Fields keeps up their quality, quantity and price points, they are sure to give their competitors a run for their veggies.

PS: We shall be back to try their dosas later. The ones being served on the table next to us looked inviting enough for us to come in again.