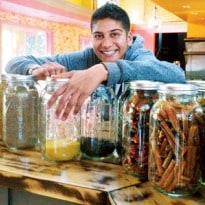 Preeti Mistry started Juhu Beach Club as a pop-up restaurant in front of a liquor store with a small deli in 2011. Now she has opened a full-service restaurant with table service, beer and wine and an exhaustive menu. Pics courtesy/ Preeti Mistry


One knows Indian cuisine is popular pretty much everywhere, but Mumbai street food? And that too in California? Wow! How did this come about?

I love street foods and have always been fascinated with all the snacky items you find on the streets in India and in snack and sweet shops. So I was drawn to creating my own version of these items. I have been a chef in California for almost 10 years and so, I figured that applying my professional experience to the Mumbai street foods I love and crave so much, would be a fun project where I could add my own imprint on the iconic dishes.


You left a steady job to start a pop-up restaurant. What triggered that?

I always wanted to do something on my own. In 2011, I realised that I was ready to do something different from running large kitchens for Google, where I was an executive chef (and before that at the deYoung Museum). I was craving to do something more personal. I had just come back from visiting Mumbai with my partner and parents and I was really inspired by all the amazing and varied street food in Mumbai. The pop-up started in 2011 with very humble beginnings in the front of a liquor store that had a small deli. Two years down the line, we have just opened a full-service restaurant with table service, beer and wine and a full menu.           The Vindaloo Chicken Wings is one of the bestsellers at Preeti Mistry's Juhu Beach Club restaurant


Why did you name it Juhu Beach Club?

I remember Juhu Beach from visiting India for the first time when I was four years old. Of course my fondest memories from that time is about kites more than food. But when I went back as an adult, I was intrigued by the place, the sunsets, the food...everything.


Is your clientele largely NRIs or pretty much every community?

The famous Mumbai Vada Pav is one of our most popular pav, second only to the beef pav! That gives you an idea of the global nature of my clientele. People in the SF Bay Area are very open to new foods and enjoy everything we make. There is a great deal of interest on our Facebook and Twitter pages every time I announce a new dish. People from different communities and ethnicities come to Juhu Beach Club to eat.


You have managed kitchens and been on celebrity chef shows. But running a business is different. Was it tough to set up shop?

Well, I had a lot of help from my partner to set things up, but I really did the pop-up with just me, a cashier and a dishwasher! Since then, there have been a ton of people involved in supporting us in getting the restaurant open. Now I have a great team in the back and the front of the restaurant to make it happen.


So what do people ask for most with their beer or wine?

The Vada Pav, Vindaloo Chicken Wings, the Gujarati Samosas, which I make by hand and the Shrimp Curry are all best-sellers. Our Bombay sandwich is a big hit too. When people tasted it first, they were delighted. Most said they didn't know what they were nibbling, but it tasted great. We put the cilantro chutney, the sliced beets and pickled onions into the Bombay sandwich. It's grilled and served much like we had at Juhu Beach when I visited India.

Listen to the latest songs, only on JioSaavn.com
All of our wine is on tap. But given the weather and the spicy nature of Indian food, people prefer beer. But that's not all. I make a sassy lassi in-house, and it's sweet and salty. We also have lemonade and the Darjeeling Limited, which is half cilantro lemonade and half tea. Of course there is hot chai. And believe it or not we will also be serving Thums Up and Limca imported from India! Very like Mumbai.


The first of the Juhu Beach Club restaurants is open at Oakland. Any expansion plans?

CommentsWe are just focussing on this restaurant and making it great for now. No big plans beyond that at this stage.