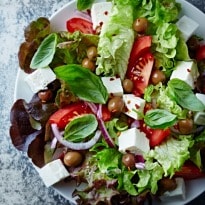 Beautiful blue waters, sun-soaked beaches and white-walled towns, Greece is unmatched for its breathtaking landscapes. While that may have taken you many miles away, my fantasy is incomplete without its rich food. During those long lunches and balmy alfresco dinners, I see myself feasting on some of the finest ingredients in the world. Whether it's a fresh Greek salad, the famous fava dip or a lovely spinach pie, the Greek table offers a variety of colours and flavours.

For a health freak, who is as paranoid about the health quotient as the flavour, it was love at first bite. When I recently caught up with Chef Paris Kostopoulos from Greece, I could easily agree that Greek food goes beyond the pleasures of simple eating. There was coffee, curiosity and a whole lot of chatter. I discovered that there is a lot that we can learn from the Greeks when it comes to healthy eating.

By now, you've probably heard about the miraculous Mediterranean diet. Most health experts claim that it is one of the healthiest diets to follow and there's ample scientific evidence to prove that. A Harvard study shows that switching to a Mediterranean diet reduces the risk of heart disease by 30%. It has also been named as the 'longevity diet'. (Why the Mediterranean Diet Beats All Others)

Here's my take away from what the Greeks have done right and six reasons to love their cuisine.

1. Say 'Yes' to Olive Oil. Extra virgin olive oil, that is. It's the oil that is extracted from the first pressing of olives and is considered the finest with a sharp fruity flavor. This oil is made without any chemicals or industrial refining. Its quality and taste are influenced by the variety of olives used and the region in which they are grown. Greece is home to some of the best known varieties of olives in the world which makes it one of the top three olive oil producing countries. A drizzle here and a splash there, and the plate gets a healthier hue. (The Best Cooking Oils for Your Health)

Chef Paris Kostopoulos shared that some of the finest olive oils are produced from Koroneiki olives which are grown only in Greece around the Kalamata region. "To achieve great quality, it is important to ensure that the oil is extracted through the cold-pressing technique. This traditional method helps in keeping the acidity low," adds Chef Kostopoulos.

2. Choose fresh and seasonal ingredients that are full of flavor. The Greeks use fresh fruits and seasonal vegetables that not only add colour to their meals, but also make it a wholesome cuisine. Greek cuisine is beautiful in its simplicity. Vegetables may be served raw or roasted with mild spices to retain the actual flavor. Fresh fruits are mostly used in Greek desserts or served as preserves. As I mopped up a local marmalade made with apples, honey and cinnamon, Chef Kostopoulos explained, "We don't mix a lot of products as it may destroy the flavours. The key is to always use great quality raw materials." (Recipe - Greek Salad)

3. Favour locally produced organic ingredients. Greek cuisine uses a lot of local and organic produce, especially honey. Organic, raw honey is definitely a great alternative to refined sugar and it is used in most of their desserts. A lot of vegetables like tomatoes, aubergine, zucchini, spinach and potatoes are homegrown and garden fresh. The climate in Greece is perfect for growing olive and lemon trees. The Kalamata olives from Greece are world famous for their great quality and taste. And as we spoke about them, I couldn't resist myself from popping in another one of these delicate darlings. The olives were stuffed with almonds and dipped in a Cabernet-honey syrup. (Recipe - Spanakopita)

4. Keep it light, keep it simple. Greek cooking techniques are fairly simple and healthy like roasting, grilling and steaming. Greek cuisine emphasizes on cooking light with limited use of spices or heavy sauces. They use fresh tomato puree instead and subtle spices like cinnamon, nutmeg, cloves, all spice and star anise. (Recipe - Moussaka)

5. Herbs help. The Greek mountains are blessed with an abundance of local wild herbs and spices. Fresh herbs can not only turn around a boring meal, but some of them are also natural healers. Greek dishes are dressed up with herbs like thyme, dill, parsley and oregano.

Promoted
Listen to the latest songs, only on JioSaavn.com
6. Sip some red wine. Greece is one of the oldest wine-producing regions in the world with a rich history that dates back to almost 6500 years. Due to the favourable climate, they grow some of the best known varieties of grapes. A glass or two of red wine usually accompanies their meals. Studies have shown that moderate consumption of red wine may be good due to the presence of antioxidants. (The Indianisation of Wine - Pairing Ideas)

CommentsAfter five years of schooling in the 'Escuela De Hosteleria De Girona Sant Narcis' in Spain, he worked in luxury hotels in Greece and France, as well as in restaurants in Spain. The highlight of his work experience has been his training in one of the best restaurants in the world, 'El Celler De Can Roca'. Chef Kostopoulos focuses on Messinian cuisine and the  wealth of local products available in the Greek region. He's visiting India for the first time for a Greek Festival in the Capital.