A Little Wine and Chocolate for Good Memory! 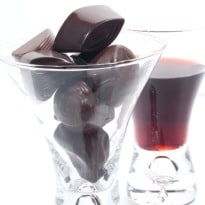 The benefits of dark chocolate and red wine have been celebrated for long. Various studies have claimed that little indulgence in red wine and dark chocolate won't be as bad as its is generally believed to be. While red wine has been found to be significantly beneficial for its anti-ageing properties, dark chocolate has become popular as a super food due to its high content of flavonoids.

A recent research adds something new to its list of benefits. According to the study, red wine and dark chocolate can boost your memory. Both are a good source of resveratrol which assists in maintaining sharp memory.

"The findings suggest that regular, high-level intake of resveratrol - a compound found in red wine and dark chocolate - may convey protective effects on cognitive functions, a hypothesis that now needs to be evaluated in large-scale clinical trials," Veronica Witte, a neuroscientist at the Charite-Universitatsmedizin Berlin in Germany, was quoted as saying.

In a study involving overweight adults, those who took resveratrol supplements for six months had better short term recall than their counterparts who took a placebo. The people who took the supplement also had more connections among brain areas involved in memory. Witte and her colleagues tested 46 participants who were overweight but otherwise healthy. Half of the volunteers were randomly assigned to take 200 milligrams of resveratrol daily for six months. Those who received resveratrol supplements remembered more words on a list that they had seen 30 minutes previously than those who received the placebo.
Listen to the latest songs, only on JioSaavn.com
"More research is needed to confirm resveratrol's brain-boosting effects," said the researchers. Apart from red wine and dark chocolate, red grapes, peanuts, blueberries and Japanese knotweed are also rich sources of resveratrol. The research was reported in the Journal of Neuroscience.