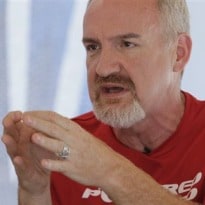 Something new is coming to the parade of food festivals that has sprung up around the country -- CookOUT/RockOUT, a food and music event celebrating LGBT chefs and other food luminaries. "It's a way to showcase in a positive, fun light, diversity within the food world," festival founder Bruce Seidel says of the event, which launches in Los Angeles in the fall. The goal is to show people that, 'Hey, gay people are everywhere and this is a way to celebrate that whether you're gay or not."

Seidel is a former Food Network executive who developed hit shows including "Iron Chef America" and "Next Food Network Star." These days he runs Hot Lemon Productions, a consulting and production company he created with a focus on food. CookOUT is one of several projects the company is working on.

He first thought of creating a television program built around mentoring people in the food profession who were struggling with coming out or other issues. But then he began thinking about creating something new on the food festival front and the two ideas jelled.

The festival won't be as big as some, aiming for 400 to 500 people rather than thousands, and the plan is to hold it at an LA estate built by a silent film star in the 1920s. Music will range from rock to classical violin and the culinary events will emphasize food experiences as opposed to "you eat 300 things, but you have no idea what you've tasted in the end," says Seidel.

Promoted
Listen to the latest songs, only on JioSaavn.com
The roster of performers and chefs still is being put together, but among those from the LGBT community who already have signed up for the event are Big Gay Ice Cream, the New York-based frozen treats shop which also has a branch in Los Angeles, and Art Smith, Oprah's former personal chef. Straight chefs also will be in the lineup.

Smith is looking forward to an event celebrating "the vast diversity within the food world of openly gay chefs," noting that "there are many who still cannot be openly gay in their chosen careers."

Top photo: Art Smith, who served as Oprah Winfrey's personal chef, is among those from the LGBT community who have signed up for the fall 2014 CookOUT/RockOUT event. AP Photo/J Pat Carter