All about Chhath Puja 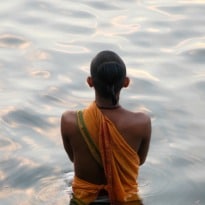 Chhath Puja is celebrated twice a year for four days each. The one during summers is called Chaiti Chhath while the second, known as Kartik Chhath, is celebrated in winter. The ongoing Kartik Chhath is the more popular one. During this festival the Sun God, Surya, is worshiped and thanked during the Chhath Puja to promote the well-being, prosperity and progress of families and individuals.

Chhath is celebrated six days after Diwali. It is dedicated to the Sun god, and is one of Bihar's most popular festivals. It is also celebrated with great enthusiasm in Jharkhand and Uttar Pradesh.

On the first day of the puja devotees bathe early in the morning in the holy water of Ganga and also bring home the sacred water to prepare the prasad. They take only one meal known as kaddu-bhat which is cooked by using bronze or soil utensils and mango wood over the soil stove.

This year millions of devotees, particularly women, took a holy dip in rivers, ponds and other water bodies in Bihar as the four-day Chhath festival began on 6th November, amidst tight security.

She is a 'varti' - one who performs the Chhath prayers and follows age-old rituals associated with it.

"The banks of river Ganga, Punpun, Gandak and Kosi as well as big and small water bodies were crowded as devotees prepared vegetarian food on handmade earthen 'chulhas' (cooking stove)," a police officer said.Sarita Devi, another varti, said they used only dry wood from mango trees and bamboo baskets for cooking.

After nahai khai, another ritual 'kharna' is observed when 'Rasiao-kheer' will be cooked and distributed among neighbours, friends and relatives. During the festival, married women observe a fast for 36 hours and devotees traditionally offer wheat, milk, sugarcane, bananas and coconuts to the sun.

The administration, along with voluntary organisations, is working to manage the crowds and keep the area around the river banks clean. Bihar Chief Minister Nitish Kumar asked officials to keep river banks clean and to tighten security in view of the serial blasts in Patna last month.

On the third day of the festival people offer the Sanjhiya Arghya at the ghat of riverbank. At the night of Chhath vibrant lamps of clay are lighted under the covering of five sugarcane sticks. The sugarcane sticks symbolize the Panchatattva (earth, water, fire, air and ether).

Listen to the latest songs, only on JioSaavn.com
On the last day of the festival devotees break their fast by consuming the Chhath prashad. Sweets like Kheer, Thekua (cookies made with whole wheat flour) and fruits included in a small bamboo tokari are offered as Prasad. It is first offered to the sun at the river banks. The prasad should be cooked without salt, onions or garlic.