American e-commerce giant Amazon will fly a warehouse at an altitude of around 45,000 feet that would act as a launchpad for drones, with an aim to deliver consignments in a jiffy, media reports said today. 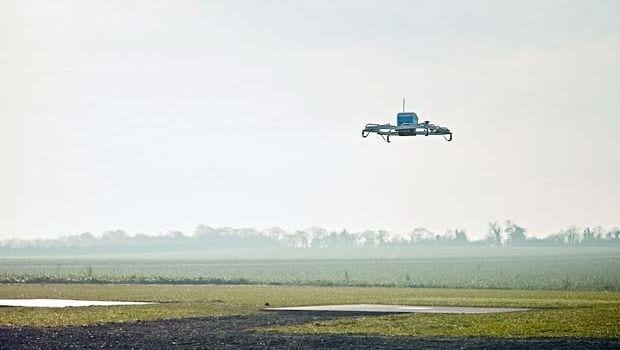 Highlights
American e-commerce giant Amazon will fly a warehouse at an altitude of around 45,000 feet that would act as a launchpad for drones, with an aim to deliver consignments in a jiffy, media reports said today.

Amazon, after winning a patent for flying the warehouse in the US, announced plans for an "airborne fulfillment center" (AFC) such as an airship, CNBC reported.

The airship will be stocked with lots of products and would float at an altitude of around 45,000 feet, it said. When a customer places an order, a drone or unmanned aerial vehicles (UAV) will fly down and deliver the parcels.

Amazon said the process would require little power as the drone would be gliding down rather than having to take off and land.

"When the UAV departs the AFC, it may descend from the high altitude of the AFC using little or no power other than to guide the UAV towards its delivery destination and/or to stabilize the UAV as it descends," the patent filing explains.

The firm revealed several uses for the flying warehouse. One example is at a football match where customers may want certain items such as food or merchandise. Ahead of the game, the AFC could stock up on items and deploy these during the game with drones when they are ordered.It could also be used as a giant advertising board, allowing customers to order the items on display. All of these can be ordered "within minutes".

The drones would be able to communicate with each other via a mesh network to give information such as weather and route. UAVs could also recharge on the airship, the report said.

Listen to the latest songs, only on JioSaavn.com
Amazon's filing explains that the blimp would remain in the air and be refueled and replenished using a shuttle. This could be a smaller aircraft capable of docking onto the AFC and unloading products as well as fuel.

The patent filing was awarded in April this year but only circulated this week after venture capital database CB Insights analyst Zoe Leavitt tweeted the document. Amazon successfully trialed its first delivery by drone in the UK earlier this month and is pushing ahead with plans to make this widely available.