An Egyptian Recipe for Grilled Fish 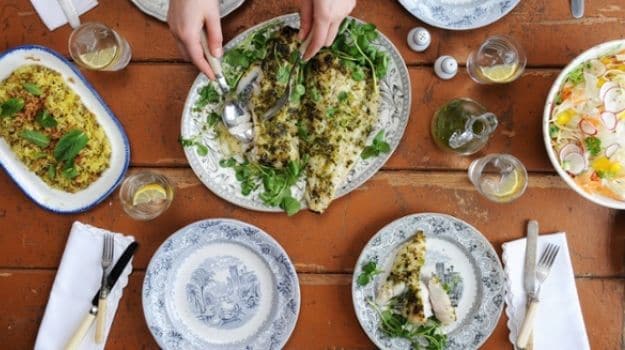 I discovered today’s dish in unusual circumstances. I was on a romantic holiday with the woman I thought might become my wife, if only I could stop dithering and pop the question. We were wandering around the Egyptian port city of Alexandria, taking photographs of elegantly dilapidated colonial houses, when two men in military uniform suddenly appeared on either side of us, toting enormous machine guns.

With a great deal of shouting and gesticulating, they ushered us into the imposing building we had just been photographing – which, it turned out, was some kind of intelligence headquarters. We were held in a waiting room for two hours then taken to an office where a man in a khaki uniform and luxuriant moustache eyed us from behind his gigantic desk. On the wall behind him was a painting of a lion being subdued by a female warrior with huge breasts.

The conversation got off to a difficult start, as he explained that by taking photographs of a military building, we had broken the law and put ourselves under suspicion of spying. But then we got a lucky break.

“Where do you come from?” he asked. “London,” I answered meekly. “Aaaaaah, London!” he roared. “I love London. A beautiful city! I come all the time to see the West End musicals.”

“I love musicals too,” chipped in my girlfriend. He swivelled his chair round to face her. “You do? Which is your favourite?” My girlfriend paused. This was clearly quite important. You could almost hear the cogs of her brain whirring, and her glasses steamed up a little. Then her face relaxed. “Starlight Express,” she said with quiet certainty. “That’s my favourite too!” cried our delighted interrogator. “Especially the bit where they skate right around the theatre.” Before sending us on our way, he told us we had to try Hossny restaurant in Saffer Street. “Best seafood in Alexandria.”

It was indeed delicious – and not just because it was accompanied by the sweet taste of liberty. We ate clams cooked on a skillet with parsley and garlic; a delicate fish broth of crab and clams; grilled prawns with garlic and cracked black pepper; and, the best thing, sea bass with cumin, garlic and chilli – a classic Alexandrian dish, which we have reproduced here.

A few days later, I finally proposed to Jemima. When a woman has rescued you from incarceration, you don’t want to risk being without her. And, nine years later, I still don’t.

Like our Egyptian interrogator, this recipe looks more frightening than it is. But follow the Kitchen Countdown and take it slowly, and you will sail through. And the salting of the fish makes it firmer and harder to overcook. If in doubt, underdo it.

1 Lay the fish on a tray, skin-side down and sprinkle the flesh with salt. Allow to sit at room temperature for about 30 minutes. Rinse quickly and dry well. This will firm up the texture and improve the flavour. Preheat the grill.

2 Blend together the dressing ingredients in a liquidiser or using a hand-held blender.

3 Line the grill pan with foil and place the fish skin-side up on it. Place under the hot grill for about 5 minutes or until the skin has browned.

1 Soak the rice in lots of water and set to one side.

2 Place the lentils in a pan with plenty of water and bring to the boil. Simmer for about 15 minutes or until the lentils are almost cooked. Drain well and rinse under hot water.

3 In a large pan, fry the onions in the olive oil with the turmeric for 5 minutes until soft.

4 Drain the rice and add to the oil along with the garlic and lentils. Stir-fry for a few minutes. Blitz the cauliflower florets in a food processor and add to the rice. Stir well and season.

5 Add the stock and bring up to the boil. Cover tightly and turn the heat down to very low. Simmer for 5 minutes before turning the heat off.

6 Leave the pan to stand for about 15 minutes for the rice to steam and cook. Fluff up the rice with a fork and serve.

1 Mix the salad ingredients together.

2 Toss with the dressing.