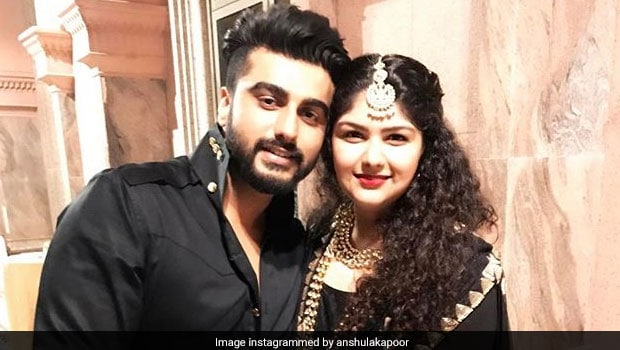 Highlights
Bollywood actor Arjun Kapoor turned 33 the day before yesterday and the internet saw a deluge of wishes from fans and industry friends, for him. The genial actor, who will be seen opposite Parineeti Chopra in Namaste England next, threw a birthday bash, where all the who's who of Bollywood were in attendance. Obviously, the first ones to turn up were his half-sisters Janhvi and Khushi Kapoor, as well as his sister Anshula Kapoor. Well, it seems like Arjun had a lot of fun on his birthday and is apparently still hungover with all the love and good wishes that he got. This morning Arjun took to Instagram to share a snapshot of his birthday cake's preparation, which, according to him, was done by his sister Anshula Kapoor, along with a very cute caption.

Apparently, Anshula had been the brains behind Arjun's birthday cake, for which she had got customised cake toppers from a Mumbai-based company. Arjun made it a point to show the world just how much his sister loved him by giving us a peek into the 'BTS' of his birthday prep, saying, "@anshulakapoor's prep for the cake was more than what most film productions do." For her part, Anshula also shared that snapshot on her Instagram stories, thanking the company for the adorable cake toppers. As with most celeb birthdays, just one cake rarely suffices - so there were two!

Also Read: Happy Birthday Arjun Kapoor: 9 Foodie Secrets Of The Actor You May Not Have KnownHave a look:

While the first cake topper said "Thirty-Three", the other one said, "Happy Birthday Bhai."  Aren't they both just adorable? What's a better way to say 'I love you' to anyone than make them feel special on their birthday? Arjun Kapoor is a self-confessed foodie and he recently revealed in an interview with a popular English daily that he loves his cheat meals. The actor's mantra is to indulge in cheat meals, rather than celebrate one full day as 'cheat day.' He says that the calories consumed during a cheat day are much harder to burn than the amount of calories consumed during a one-off cheat meal. True that!

CommentsThe actor also revealed in the same interview that he loved indulging in pancakes and waffles, but what made the foodie in him go weak in the knees were the meals prepared by his grandmother. He firmly believed that one should cheat on their diet with a home cooked meal that has been prepared with a lot of love. Point taken, Arjun! We wish you a belated happy birthday and a great year ahead.