Kriti Sanon is in Chandigrah with her Arjun Patiala co-stars Varun Sharma and Diljit Dosanjh. Kriti posted snapshots of herself enjoying some delicious authentic Punjabi grub at the famous Haveli dhaba on Delhi-Chandigarh highway. 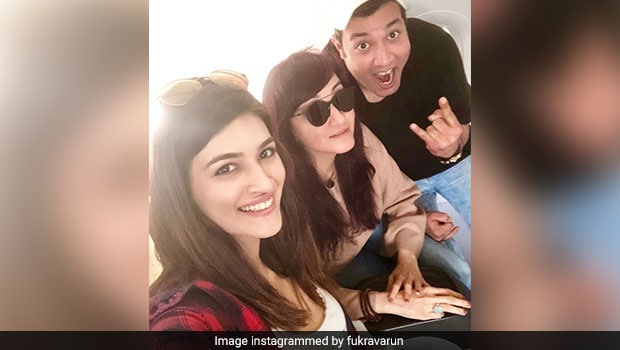 Highlights
Bollywood actor Kriti Sanon is in Chandigarh, shooting for her next flick Arjun Patiala which also stars Diljit Dosanjh and Varun Sharma. It seems like Kriti is having the time of her life in the North Indian city, which is also known for its delectable food. The movie is being directed by Rohit Jugraj and Kriti plays the role of a journalist in the film. There is considerable interest in the film that is mostly going to be in Hindi, and the dialogues will also be peppered with fair amount of Punjabi. The movie promises to be a laughter riot as both Diljit and Varun are known for their rib-tickling presence and impeccable comic timing.

Meanwhile, Kriti posted a number of snapshots on her Instagram stories, from the moment the movie's shooting kick-started. The cast including Kriti and Varun seemed to be enjoying a hearty meal at the famous North Indian restaurant Haveli, before reaching Chandigarh. Have a look!

That butter smeared naan with dal makhani, raita and chana masala looks yummy, doesn't it? Now that's what we call some delicious energy food! It's criminal to miss out on Punjabi food if you're anywhere in this part of the country and Haveli is one of the best places to grab some authentic grub. Kriti also posted videos of herself enjoying some chilled lassi in a kulhad, along with her companions. Haveli is located on Delhi-Chandigarh highway, just beyond Murthal and it's a popular pit-stop for people travelling to the North, via the route. (Also Read: 10 Best Punjabi Recipes)

The dhaba-like feel of the place is unique and the food is simply delightful. The restaurant gives you the feel of an authentic hole-in-the-wall dhaba, with the ambiance of a 4-star restaurant. What's more? The restaurant is pocket-friendly too! So the next time you're en-route Chandigarh via Delhi, you know where to stop and grab your refreshments at!