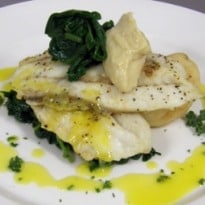 In Australia, more than two-thirds of barramundi eaten is imported from Asia, much of the flathead sold is likely to be an unrelated species imported from South America, and shark, sold as "flake", could be anything from gummy to a threatened species.

Peak environmental groups, including Greenpeace, the Australian Marine Conservation Society and Taronga Zoo, have formed an alliance to demand more accurate fish labelling to help consumers understand what they are buying and where it comes from.

They launched the "Label My Fish" campaign in Sydney on Thursday to highlight that while 72% of seafood Australians eat is imported, consumers often had no way of knowing that when ordering from restaurants.

The campaign claims poor practices in some fisheries overseas is threatening species, destroying habitats and undermining workers' rights, and that people should be able to easily identify Australian fish, subject to more stringent quality controls.

David Ritter, chief executive of Greenpeace, said Australians were "genuinely shocked" when they realised they might be eating an endangered or unidentified species.

He said some shark species contained high levels of mercury, but poor labelling meant people were unaware of the species they were eating, potentially placing pregnant women and young children at risk.

"Politicians have the power to change the law and protect the environment and public health," Ritter said.

"The Australian fishing industry is one of the most sustainable in the world and a simple legislative change is all that's needed."

John Hart, chief executive of the Restaurant & Catering Industry Association, said forcing restaurants to label the source of all seafood items on their menu would be costly and onerous.

"Most seafood suppliers can't guarantee a particular product with any certainty, so menus would have to be changed every week if this sort of regulation was imposed, costing industry somewhere between $100m and $300m if it's enacted," he said.

"We've continued to advocate that the seafood industry should adopt a promotional campaign advertising the quality of Australian seafood because, after all, that's what this is all about."

Senator Richard Colbeck, parliamentary secretary to the minister for agriculture and responsible for fisheries, agreed that the labelling would be a burden.

"The government is committed to reducing red tape and is concerned that mandatory country of origin labelling for seafood may be costly and impractical for the restaurant and catering sector to implement," he said.

Labelling would have to take into account physical menus as well as those on websites and social media accounts, he said.

He questioned the cost estimate of making the changes because it assumed all restaurants sold seafood. He said changes were easy to make to online menus, and some cost burden was inevitable with any legislative change.

While supermarkets have adopted country of origin labelling since 2006, he said, legislation meant restaurants were exempt and that there was no compelling reason for that.

"We know over 70% of people buying fish assume it to be Australian and with that comes trust that the product is fished sustainably and is safe," Fish said.

"We need to remove the exemption provided to restaurants because they're not volunteering to do it of their own accord."

Last month Fish called for the name "barramundi" - an Aboriginal word meaning "large-scaled fish" - to be used for the Australian product only, and said the imported fish should instead be labelled "sea bass" or "Asian perch".

A Senate inquiry into seafood labelling is under way, and is due to report on 4 December.