Big Mac 'n Fries, Sure! Your McDonald's Waiter Will be With You in a Minute 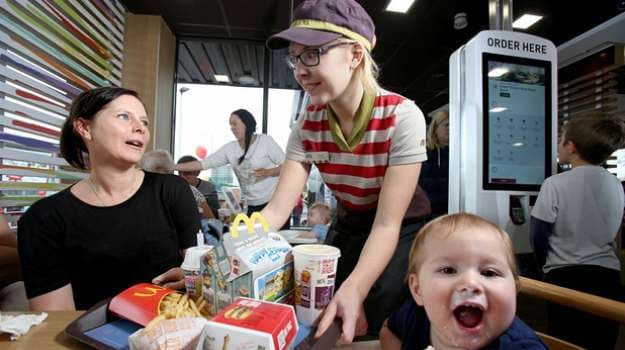 Table service goes down well with visitors to the burger chain in Greater Manchester as the fast-food giant tries ways to reverse sliding sales.

For McDonald's executive Andy Shaw, it is the perfect day to test a radical change on customers.

"August. Raining. Kids off school. Families looking for a treat," he says, standing inside the first British branch to offer table service. On a Thursday lunchtime in Mottram, Greater Manchester, this particular fast-food outlet wants people to take their time for once.

"I really enjoyed the experience," says Steve Mitchell, 57, an account manager from Shrewsbury who ordered his lunch through the new system. Customers tap their order into a touchpad, pay for it by card, then go to a table and await delivery by a member of staff. "I'd ordered a chilli chicken meal and it arrived in five minutes. No waiting in a queue of people, it was great. I'll definitely do it again."

McDonald's, which expects to roll out table service to all 1,250 restaurants in the UK, hopes customers will be wooed by the promise of avoiding queues, comfy seats in a dedicated zone and waiting staff in aprons laden with any of the extras you might want for your coffee or Big Mac and fries.

Lee Cunningham, 20, a barman, is also an early convert. "Sometimes you have to wait for ages in a McDonald's, but this seems to have cut the queues down."

Jenny Wilson, 39, a school attendance officer who has brought two of her children, says: "It's still only McDonald's, but it's nice to have the food brought to you."

Outlining the move's appeal to customers, Shaw, head of McDonald's service solutions in the UK, adds: "They think it's more comfortable, less stressful and actually faster. We see it as a different level of hospitality."

McDonald's is trialling a number of changes in service as it attempts to reverse declining global sales, although the UK remains one of its few bright spots. In the US, its home market, it is offering an all-day breakfast and regional menus including lobster rolls in its New England branches. The world's largest fast-food chain is battling to retain customers in the face of the "fast-casual" trend in which newcomers such as Mexican eatery Chipotle and rival burger outlet Five Guys eat into its sales.