Bratislava Croissants Offer a Taste of the Past 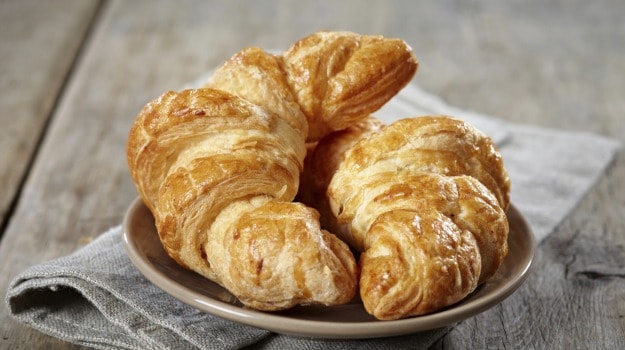 For Slovaks, it is the stuff of Marcel Proust's madeleine recollections: a scrumptious, crescent-shaped pastry filled with walnuts or poppy seeds that triggers a rush of memories. All but forgotten under the decades and drabness of communism, the tasty Bratislavske rozky -- or bajgel, as they are also called -- are making a comeback.

Slovak pedestrians munch away on the traditional treat at cafes and snack shops or just walking around the narrow cobblestoned streets in the old town of Bratislava. The reward? A reminder of the rich history and vibrant cultural melange of this capital cut through by the Danube at the heart of Europe.

The cousin of the French croissant, the Italian cornetto and the Austrian Kipferl, the bajgel harks back as far as the 16th century but its exact provenance remains shrouded in mystery. Turkish, German or Slovak? For expert Sandor Pap, it is to the residents of Bratislava, known as Pressburg under the Austro Hungarian Empire of the late 19th-early 20th century, that the crescent cookie owes its beginnings. "Back then, people didn't care about questions of nationality or faith," said the employee of the state-funded Bratislavske Rozky Association.

Case in point: the historic Schwappach pastry shop, an institution that has been around for centuries, goes by a German name but refers to its croissants by yet another term -- their Hungarian designation, Pozsonyi kifli. The bakery began churning out the treats over Christmas 1785, when master pastry chef Wilhelm Scheuermann included them in a holiday window display to much fanfare.

Today, the Bratislavske rozky label comes with strict criteria. "The croissants must be marbled and golden, meaning you have to brush on two layers of egg yolk. Their filling must make up 30 percent of the total weight and they have to be baked chemical-free," said Eva Bolemant, whom the association employs to market the sweets.

"The shape varies with the filling, allowing clients to tell them apart: those with walnuts are in the shape of a C, while the poppy seed variety look like a horseshoe or U." The pastries were widely available until the end of World War II. But communism's command economy shuttered many family pastry shops and the original recipe got lost in the shuffle.

Bratislava's croissants survived in home baking until they could resurface at pastry shops and cafes after the fall of the Berlin Wall in 1989. "When we sell them at public events, like now at the Christmas markets, older people stop by and recount their childhood memories," said Bolemant. "And how their grandmothers made the pastries. But they regret that they no longer have the recipe."

While Pap and Bolemant insist there is no official original recipe and every family uses its own, there is a version patented by the city's well-known master pastry chef Vojtech Szemes. The pastries gained their European Union-legislated "traditional specialties guaranteed" trademark in Slovakia. Yet two of the former Austro-Hungarian Empire countries -- Austria or Hungary -- could just as well have claimed it: Pressburg, alias Bratislava, lay at the crossroads, right on the border with the two "modern" states.

Bratislava's croissants are now starting to make a name for themselves outside Slovakia. One store, the FantastiCo, a small but trendy glass-windowed corner shop that makes only Bratislavske rozky which are touted as among the city's best, began selling the rolls last year on an "E-shop". Orders quickly came in by the dozens. Today, they arrive in the thousands, with more and more coming from abroad.