Breakfast: too early for culinary innovation? 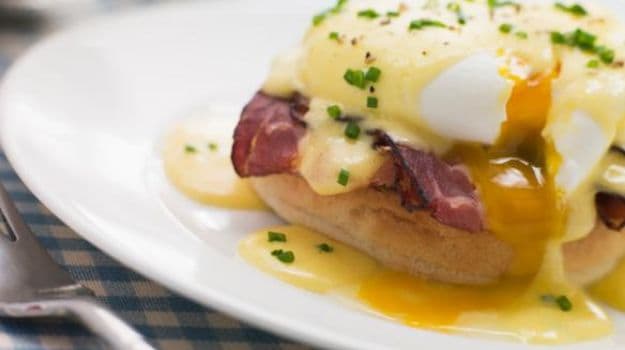 Voting has opened in the search to find Britain's most innovative breakfast. But how far-out do you want breakfast to get? Do you crave curry, steak or Levantine lahma for breakfast? Or is it just too early in the morning?

Citizens of Britain, it is time to make your voices heard. Ahead of January's annual Farmhouse Breakfast Week (FBW), voting has opened for the inaugural Best Breakfast Awards, which, intriguingly, include a category dedicated to unearthing Britain's most innovative breakfast.

You have until 19 January to have your say, not that the awards' organisers (it's the Agriculture and Horticulture Development Board, quango fans) seem to be girding themselves for a massive influx of outrageous suggestions. The FBW website rather drearily defines innovative as: "Something a bit different - a dish with unusual ingredients or flavour combinations or ingredients sourced from local suppliers." Given that low bar (are locally sourced ingredients really that innovative in 2013?), they may well be surprised by what this poll uncovers. For there are many cafes and restaurants across Britain that are making a serious effort to, as the FBW slogan has it: "shake up your wake up".

For instance, I have enjoyed a breakfast of corned beef hash at the Iron House in Norwich, and recently passed on an early morning rib-eye steak and hash browns at Crab Manor in Yorkshire. I like the unusual Middle Eastern breakfast options at Honey & Co in Fitzrovia (pizza-like topped lahma; ace Merguez sausage rolls with harissa), and, a few streets away, Lantana continues to help popularise an open-minded Antipodean approach to breakfast, with dishes such as corn fritters with bacon, slow-roasted tomatoes, spinach and avocado chilli salsa.

The new-ish Koya Bar, a spin-off from the original Soho noodle restaurant, is going much further in trying to turn Londoners on to the traditional Japanese breakfast of rice and miso soup with grilled fish and pickles. The wider menu includes savoury rice porridges and even an English breakfast udon broth, topped with floating fried egg, bacon and shiitake mushrooms. Up in Bradford, the Sweet Centre Cafe - and, at weekends, its restaurant too - is well known for its (reportedly mild) morning chickpea curry, as well as cereal-trumping seekh kebabs and samosas.

Exciting as all that sounds, it does raise the question: just how racy do you want breakfast to be? Particularly if you haven't grown up with such foods as 8am staples. The answer lies, I think, less in the food itself, than what sort of morning it is. Day to day, most of us rise reluctantly. We're sleep-deprived carcasses stumbling blearily into a cold and hostile world. For the first hour, at least, you are simmering with resentment at actually being out of bed. Even if you're not already running late, it is painful to do anything more than pour milk on to cereal, pop bread in a toaster, or maybe boil an egg. The last thing you want is to be faced with complex flavours that require you to think. You want to eat bland, familiar comfort foods with a bovine passivity. This is less food as pleasure, more food as pragmatic fuel, until that third (pint of) tea/coffee kicks in, and you begin to feel vaguely human.

In sharp contrast, there are those rare days when you wake up, early, full of the joys of a solid eight hours, when suddenly the world seems alive with possibility. Particularly if it's the weekend. On such days, thoughts inexorably turn to treating yourself, whether that means whipping up a hollandaise for eggs Benedict or, simply digging out those posh croissants you've got in the freezer. Even better, you go out and let someone else do the hard work. At such times, you're definitely open to more adventurous suggestions. Whether that means eating neglected classics like kedgeree or kippers with mustard butter at the Wolseley (I can dream, can't I?), or black pudding, apple mash and eggs at York's Star Inn the City.

Of course, there is a third type of morning when all breakfast bets are off, and that's when you're mortally hungover. In such desperate times, you need sugar, you need carbs, you need help. And you need it now. Over Christmas, particularly, this is when a can of full-fat Coke and the remnants of last night's trifle or Sara Lee double chocolate gateau come into their own. Cold from the fridge, they are balm for a broken soul. Although, I realise, that tendency to sweet foods is a personal one. As the How to eat series has revealed, there are many, many people reading the Guardian whose favourite breakfast is last night's curry, kebab or pizza. That's your sophisticated broadsheet audience for you.

Do you crave more variety at breakfast? Is it time we looked beyond cereal and toast, and broke the back of that powerful boiled and scrambled heggemony? Which country has breakfast nailed? And what's the strangest thing that you've ever eaten first thing?

Photo: Eggs benedict - too much for first thing or a welcome mess of rich delicious protein? Photograph: MBI / Alamy/Alamy