British Parliament's Favourite Masterchef Cooks Up a Storm in India 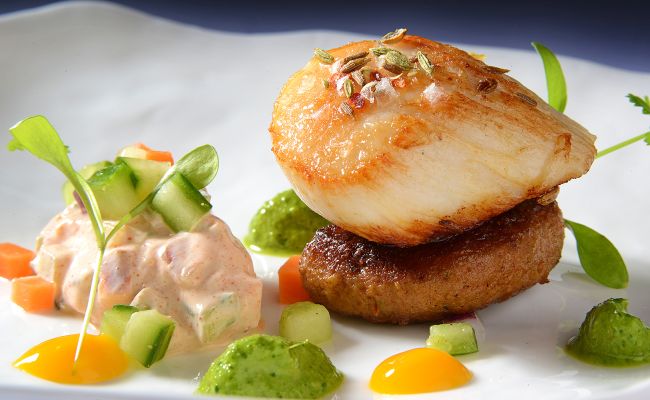 Highlights
You may have heard about Jugalbandi when two maestros (on musical instruments) complement and compete with each other. It is a treat to hear them, trying to outdo each other. Now, you can experience Jugalbandi of a different kind, the delicious sorts. To celebrate 50 years of OCLD (Oberoi Centre of Learning & Development), The Oberoi Group has flown in their alumnus, renowned owner of Cinnamon Club in London, Chef Vivek Singh. In a one-of-a-kind event, Chef Vivek is doing the tango with Chef Tejas Sovani (Executive Sous Chef, Amaranta) and serving a specially curated nine course tasting menu to food lovers in Delhi.

The celebration runs until 22nd January 2017 and reservations are open for lunch as well as dinner. Lunch is a lighter, five course affair, whereas dinner is more elaborate with nine courses. The menu creatively incorporates the best of what both the chefs have to offer, taking the diner on a regional journey in one dish and then suddenly elevating Modern Indian food in the next, with a twist on an International classic. The term ‘Modern Indian’ has been much used (and abused) in recent years. However, there are very few chefs in the world who can do justice to redefining cuisines as varied and historically rich as those from India. Chef Vivek is one such maestro and you can hear the symphony of flavours, as they play out on your palate with each bite. His flagship restaurant, The Cinnamon Club, is located in the shadows of the House of Parliament (London) and often called the ‘ 'The Westminster Canteen', being a favourite haunt of all Members of Parliament, including many former Prime Ministers.
Listen to the latest songs, only on JioSaavn.com
The tasting menu has a few standout dishes, our favourite being the Carpaccio of Scottish Salmon. Perfectly cured salmon is served with a green pea mustard chutney (that visually masquerades as wasabi, a classic combination with salmon) and topped with caramelised jhaal muri (puffed rice). The jhaal muri is Chef Vivek’s personal nostalgia at play, having grown up in Asansol, West Bengal. Such is his involvement with his food, that he has actually flown down the caramelised jhaal muri from London besides a secret garam masala (the recipe for which he refuses to part with). The menu also features duck, to pay homage to Chef Vivek’s fascination of cooking with game meat (the duck and beetroot spring roll served on the side is a winner too).

Carpaccio of Cured Scottish Salmon; Image credit: Harnoor Channi-Tiwary
Amaranta distinguishes itself from other (Modern) Indian restaurants by focussing on the ‘real’ flavours and textures of the dishes, albeit presenting them in creative and unique forms. Infact, even the plates that the food is served upon, have been handcrafted and created especially for each dish. Chef Tejas has recently returned from a short stint at Noma, arguably the World’s Best Restaurant, where he learnt new techniques and the importance of the produce that one uses. All these skills are translated into a perfectly conceptualised and executed dish on your (gorgeous) plate.

Though the tasting menu is only available till when Chef Vivek is in town, ie. 22nd January 2017, the dishes themselves will be incorporated into Amaranta’s a la carte menu, so one can go back for an encore.