10 Ice Cream Flavours You'd be Crazy (Not) to Try! 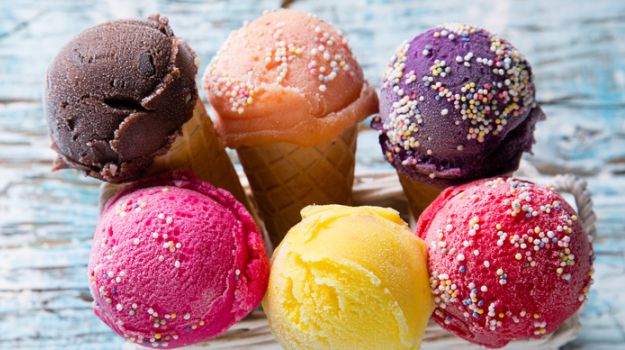 Some foods dwell deep in our hearts and memory. They are undoubtedly delicious but also special because we associate them with people we love, comfort and happy times. They evoke childhood and take you back to a time when everything seemed perfect just like a creamy cup of ice cream.

While I enjoy scooping new flavors, these bizarre bites almost made me trip. But then again, what is food without a little bit of adventure? If you've ever thought that you are too old for ice-cream, these funky flavours will show you the way forward.

What happens when someone prays persistently for ice-cream to turn healthy? Well, that someone was probably me but a cereal milk ice cream is definitely not what I had asked for. It is famously served at the Momofuku Milk Bar in New York and Toronto. Cereals are steeped in milk which is then cooked with cream and milk powder, churned in an ice cream machine and finished with caramelized cornflakes. Created by pastry chef and owner of Momokofu Milk Bar, Christina Tosi, this has become such an attraction that they've trademarked it.

Vosges Haut Chocolat is famous for all things sweet and strange. It sells unusual chocolate flavors like bacon bars, chilly truffles, mushroom and walnut, cheese and chocolate etc. If that doesn't raise your eyebrows, this will. They serve an Indian curry-flavored ice-cream! A scoop of this ice-cream tastes like a sweetly spiced curry flavored with fresh coconut, straight from the tribes of Nagaland.
Image via Pinterest/Scoopsies Ice Cream

Max & Mina's Ice-Cream in New York guarantees an unforgettable experience.  Brothers, Bruce and Mark Becker learned the art of creating ice-cream as kids and have been challenging their imagination ever since with flavours like beer, corn on the cob, black pepper, wasabi, wine and champagne, to name a ph(f)ew! The pizza ice-cream is a blend of tomato, garlic, oregano and mozzarella with an egg yolk base. I must confess, I feel conflicted and confused.

This one's a favorite during the Gilroy Garlic Festival in California. It is also popularly served at The Stinking Rose, a San Francisco restaurant that uses garlic in all its dishes. The garlic ice-cream is sometimes served as a sauce with steak. I like garlic, I really do but you need to be obsessively in love with it to dig into this shockingly sinful dessert.

With Heston Blumental in the kitchen, you can be rest assured that there is some serious craft involved. The bacon and egg ice cream was first created as an April Fool's Day experiment in New York. Later, celebrity chef, Heston Blumenthal whipped his very own version which is served at his restaurant, The Fat Duck in Bray, Berkshire. It replicates a typical breakfast platter which consists of an ice cream infused with liquid nitrogen that gives an impression of scrambled eggs, caramelized French toast, tomato jam, a thin slice of pancetta dipped in maple syrup and a tea jelly.

This is what you get when creativity goes wild. Ice-cream shop, 'The Icecreamists' in London, cooked up a storm with their notorious breast milk ice cream called Baby Gaga. The controversial ice-cream was created using fresh breast milk donations from the public with Madagascan vanilla pods and lemon zest. Can someone please tell me why?

While the Japanese are admired for their ahead-of-time inventions, with Basashi Ice they seemed to have traveled a bit too far. This vanilla flavoured ice cream is studded with chunks of raw horse flesh. Enough said!

Promoted
Listen to the latest songs, only on JioSaavn.com
This deadly dessert is found in Tokyo. The mamushi snake is one of the most poisonous snakes in Japan which is listed as one of its ingredients. Some claim that it smells like an old shoe and tastes garlicky and cardboard-like. I'll pass thanks!
Image via blog.rinkya.com

An ice-cream that uses a certain kind of jellyfish protein, which makes it glow neon on being licked.  It was created by Charlie Francis, founder of British ice cream company Lick Me I'm Delicious, with the help of a Chinese scientist. Spoons down for this one!

Image via FacebookPage/Lick Me I'm Delicious

CommentsHaggis is a savoury pudding made of minced sheep innards like heart, liver and intestines, all encased in the animal's stomach and cooked. It is the national dish of Scotland. The haggis flavor along with other British meals in the form of ice-creams, are served at Morelli's Gelato in Harrods, London.

What is the weirdest flavor that you've ever tried?