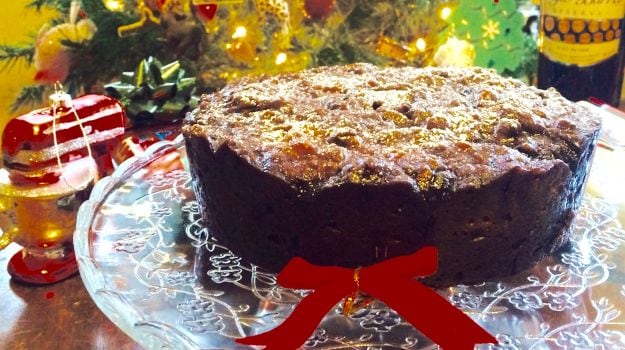 It would arrive each year by the first week of December: a brown paper parcel from Tobago, where my father's favorite niece lived. Inside was a used butter cookie tin, and inside that was a foil-wrapped cake that revealed itself to be dark as night.

The alcohol fumes that wafted off the cake as it was unwrapped were enough to make our young heads spin -- and to preserve it for what was, in those days, a three-week journey by ship from Trinidad & Tobago to New York City. For weeks after the cake arrived, my brother Ramesh and I would scurry into the kitchen and pick at it when my father wasn't looking.

This Caribbean holiday specialty, which is called Black Cake because of its signature color, Christmas Cake or simply "fruit cake," is a fruit cake that will actually leave you hankering for more. Plummy, boozy and sweet but not sugary, Black Cake is best described as plum pudding that has gone to heaven.

This cake is so addictive that once you've tried it, seeking it come December is an obsession for some. I've been bribed with everything from hand-knit scarves, theater tickets, offers of baby-sitting, and even house-cleaning for one.

Most common in English-Caribbean islands like Trinidad, Barbados and Grenada, its origins are in the Irish Christmas Cake, an equally worthy fruitcake cousin. Primarily consisting of raisins, prunes and currants, Black Cake contains only a small amount of the multi-hued candied peel that makes most fruit cakes less than appetizing. To add flavor and moisture, the fruits are soaked in a rum and cherry wine mixture for weeks.

For those of us who have a black-cake-making heritage, this fruit cake is serious business. Those who are really old school start soaking the fruits a full year ahead of time, although I have developed a "fast-soak" method, which means you can have your cake and eat it, too, all in time for the holiday season.

Every family has its own recipe with either a unique mixture of fruits, ratio of liquors or even combination of liquors. Lately, I've been using Manischewitz Cherry Wine because I find it has the same sweetness as Caribbean versions of cherry wine but with a lot more color and body.

If you hate fruitcake but love cakes that are densely rich, complex in flavor without being too sweet and ideal with a cup of tea, give Black Cake a try. You might find yourself breaking it out not just at Christmastime, but as we do -- for weddings and special occasions of all sorts -- because any excuse to eat this fruitcake will do.

This recipe is adapted from "Sweet Hands: Island Cooking from Trinidad & Tobago" by Ramin Ganeshram. It features a "fast-soak" method that uses heat to start the maceration process for the dried fruits that make up the cake.

For the fruit mixture:

For the fruit mixture:

2. Pour the remaining cherry brandy and rum into the pot with the pureed fruit. Add the cinnamon stick and star anise pods. Split the vanilla bean, scrape out the seeds and add both the seeds and the bean to the pan.

3. Place the pan over medium-low heat and mix well until just under a boil. Stir often so it does not scorch on the bottom.

4. Remove the pan from heat, cover it and allow the mixture to sit for one or two hours or as long as overnight. Alternatively, place fruit and spices in an airtight gallon jar and store unrefrigerated in a cool, dark place for at least three weeks or as long as a year.

2. Sift together the flour, baking powder, cinnamon, nutmeg and allspice.

3. Place the sugar and butter in a bowl and cream with an electric mixer until fluffy (about 4 minutes).

4. Add the eggs one at a time, beating well after each addition.

6. Using a slotted spoon, remove 3 cups of the fruit from its storage jar and beat well into the butter mixture.

7. Add the flour mixture 1/2 cup at a time, beating well after each addition, then add the burnt sugar syrup and mix well.

8. Divide the batter evenly between the prepared pans and bake for 90 minutes or until a cake tester inserted into the middle of the cake comes out clean. Remove cakes from the oven and cool in their pans for 20 minutes.

9. Combine the rum, brand, sherry and bitters for basting and brush evenly over the cakes. Allow the cakes to cool completely, then remove them from the pans and wrap tightly in plastic wrap or in a zip-top bag.

10. Store in a cool, dry place for at least three days before eating. The recipe makes two cakes, which can be refrigerated for up to three months. If doing so, re-baste with the rum mixture once a week.

Note: Burnt sugar syrup or "browning" is found in Caribbean markets or online. You can also make it by combining 2 tablespoons of dark brown sugar and 1 tablespoon of water in a dry frying pan over medium-low heat. Heat slowly, stirring the sugar until it starts to caramelize. Continue stirring until the sugar syrup turns very dark brown or almost black. Add to batter as called for in a recipe.