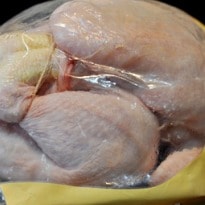 The results of official tests of retail chicken for campylobacter contamination are really shocking. I don't use the word lightly.

The Food Standards Agency was set up 14 years ago to clean up the food industry and the meat industry in particular. In the 1980s and 1990s, the UK experienced scandals over salmonella and BSE, and public trust in food weakened.

The FSA was created to rebuild public health standards and to restore consumer confidence. To do that, it needed to stamp down on errant food industry practices. It had to help shift industry's internal culture.

What these results show is that they have slipped backwards again: the rate of campylobacter is even higher than the rate of salmonella in poultry was in the 1980s; this is dreadful. Salmonella has come down and our problem now is campylobacter; but one form of bad news fading only to be replaced by new bad news is hardly progress.

Second, it is now clear that the food industry and poultry trade in particular have not got a grip of this totally unacceptable situation; essentially they have been continuing to trade while, and perhaps even by, selling contaminated food.

Third, the FSA as regulator has not been getting a grip of this poisonous mix either. The rest of government has stood back and washed its hands of the matter when it might have helped clean up the food industry; drastic cuts in local authority food law enforcement and carving up the FSA itself have not helped. So I hold the government to account for this mess.

I was deeply saddened when, in July, the FSA board chose to keep the data on individual supermarkets secret, on the casting vote of its chair, a former functionary of the National Farmers Union. The outcry embarrassed government in to a reversal, so we should at least be pleased these results are out.

To the politicians of all hues, and to the government in particular, I have this to say: when will you act on this outrageous situation? To the public, I would suggest that we refuse to buy poultry until this is sorted out. This is a public health scandal easily on a par to those of the 1980s and 1990s and reminds me of the outrage over food adulteration and contamination in the mid 19th century. Have we really sunk back to that level?

Dear British public, be outraged, act, withhold your money until you can have confidence in what you consume. This may not be orthodox public health strategy but it is definitely what history shows works when standards are as dire as these results show them to be.

Tim Lang is professor of food policy at London's City University and has served as expert adviser on food to the departments of health and environment and to the parliamentary committee that advised on setting up the FSA.