Cooking With Seawater - Is It the Best Way to Season Food? 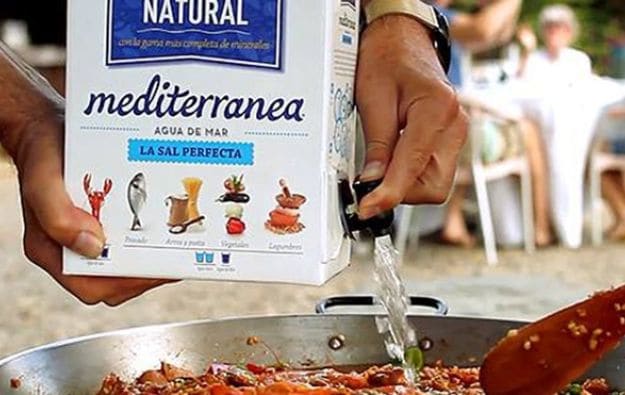 In Spain, seawater is being marketed as la sal perfecta – the perfect salt. But does it really improve the flavour of food? And is it any healthier than regular sodium chloride?

At the Baeza-Rufete restaurant, 30 miles south of Benidorm on the east coast of Spain, the rice is served smokingly hot, lightly caramelised on the bottom and with a white, fleshy prawn displayed in the centre. Unlike many of the tourist-orientated paellas along the coast this is a proper rice dish, rather than just the base for a pile of seafood. It’s also well-seasoned, without actually tasting salty.

The secret, says, Joaquín Baeza, who won Spain’s “Chef of the Year” contest in 2014, is that there’s no table salt added at all. Instead, he cooked the rice in a diluted seawater solution. It’s a tradition that has been practised in coastal villages for centuries, and espoused, particularly for seafood, by big-name Spanish chefs such as Ferran Adrià and Quique Dacosta.

Baeza, however, goes further, describing it as “the future of cuisine” for its ability to improve the flavour of food and its alleged health benefits. According to the six Spanish companies now selling filtered seawater to chefs and consumers, it’s a way to season food while using less sodium chloride and boosting our consumption of trace minerals. His supplier, Alicante based Mediterranea, source their water, currently around 60,000 litres a month, from a pipeline off the relatively unspoiled coastline on the northern Costa Brava. Mediterranea claims that its product is better for you and better tasting than, not just table salt, but also granular sea salts.

“Sea salt is a salt that’s been through a process of purification and lost a large part of its minerals,” says marketing director Albert Fernández. “Some 98% of sea salt is sodium chloride. In seawater, 86% of the minerals are sodium chloride. The other 14% are minerals such as potassium, magnesium and calcium.”

After being micro-filtered to remove bacteria and impurities, its water sells for €2.55 for a 1.5 litre pack in the high-end department-store chain El Corte Inglés. In Spain, where restaurants and home cooks generally add more salt than they would in the UK, it’s being marketed as la sal perfecta – the perfect salt.

However, one of the earliest firms to sell culinary seawater, a Scottish company called Acquamara, gave up in 2013, partly because, according to owner Andy Inglis, supermarkets and chefs were alarmed by the health implications of the product’s salt content. Cash (Consensus Action on Salt and Health) spokeswoman Katharine Jenner said in 2010: “To use a product like Acquamara is very irresponsible considering the health problems associated with eating too much salt.”

It’s a warning that Mediterranea’s American partners are taking seriously. They expect to start selling the product in the United States in June 2015, before eventually sourcing their own water from the Pacific. “The slogan ‘the perfect salt’ wouldn’t work here,” says Seawater Solutions’ boss Joe Cisneros. “Salt has had terrible publicity. Large manufacturers such as Kraft and Campbell’s have teams of people in their organisations who are dedicated to reducing the amount of sodium in their products, without reducing the taste.”

Instead, he’s trying to convince big-name chefs and food manufacturers on the west coast that seawater can be “the solution to salt”. “Of course it’s salty,” he admits. “But you apply it in the same way that you would granular salt, with the massive difference that you’re immediately reducing your consumption of sodium chloride. Plus you’re adding the 96 minerals that seawater contains. I’m convinced that you use less salt because the seawater makes the food very, very tasty.”

Cash nutritionist Sonia Pombo is not so convinced. “Even if it is 13% lower in sodium than regular sea-salt, it still has a fair amount of sodium,” she says. “I wouldn’t recommend it for cooking. Salt raises your blood pressure and high-blood pressure is the biggest risk factor for heart disease and strokes. Reducing salt has been shown to be the most cost-effective health strategy. You save so many lives and it’s so simple to do.”

It is true, though, that while salt consumption in the UK has declined significantly over the past 10 years, many recipes still include the ambiguous command “season well” and salt is added to a huge number of products. Could Mediterranea, or its competitors, really replace it? Perhaps the strongest argument is the so-called “taste test”.

“Cook half a potato in a seawater solution (one part seawater to two parts fresh) and the other half in ordinary salted water,” recommends Mediterranea’s MD Jorge Díaz-Crespo. “You’ll notice the difference.” He’s right. In a blind taste-test, the potato cooked with seawater does have a fuller, more rounded flavour. As Díaz-Crespo puts it: “The potato doesn’t taste salty. It just tastes more of potato.” That is what “season well” is supposed to mean. While it may be a while before cartons of water replace the salt cellar, we’d all be better off if our paella, potatoes, and everything else, tasted a bit less salty.