Dates Truly are the Fruit of Paradise 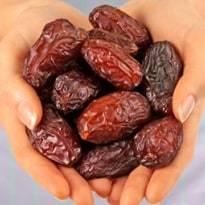 Forget those hard, sticky things you get given every Christmas. At their best, dates are an eastern delight - and one that more and more chefs are eager to share.

Biting through the paper-thin skin of a medjool to the juicy sweetness of the flesh beneath, it seems impossible that anyone could not appreciate the wonders of dates. One of the "fruits of paradise" in Islamic tradition, they can be used for everything from omelettes to dips, and are pretty nutritious to boot.

The dried fruit, which first made its appearance in the UK in the early medieval period, has gathered a slightly fusty image of late. Maybe it's because the varieties pressed on us every Christmas tend to be hard and sticky and fibrous, complete with ugly plastic "stems". But with the medjool variety available in supermarkets, fresh dates appearing in speciality grocers, and chefs such as Yotam Ottolenghi championing date syrup, things are changing for the humble date.

"In the 1950s, the only time we saw them was at Christmas," agrees food historian Ivan Day. "But today, even in the little village I live in in the north of England, you can get medjool dates, which are amazing."

Dried dates first travelled successfully to the UK from north Africa, via Arab and Venetian traders and, thanks to their high sugar content, were a perfect form of imported food, says Day. Used when sugar was expensive, they "appear in the medieval diet often in surprising dishes," he notes. "By the 1660s, they were turning up in sauces for meat and even fish, similar to tagines. The model was the Islamic school of cookery and Arab, Persian and Byzantine cookery had a huge impact on the cookery in the royal court."

Later, dates formed part of impressive "grand salads" - herbs and salad leaves topped with concentric circles of pine nuts and dried fruit. But for years, they remained an impossibly exotic luxury, only affordable to working people on special occasions. "When the normal diet was fatty bacon, hard brown bread, maybe some herring and a few vegetables, dates would have been even more special," Day explains. "It was a taste of sunshine, and another land, there was a real romance about them."

Today, dates seem to be stuck in a baking rut - only making an appearance in sweet cakes, scones or loaves in British cooking. Sami Tamimi, Ottolenghi's partner and head chef who grew up in Jerusalem, suggests branching out and adding them, chopped, to a salad with walnuts or pecan nuts.

Nawal Nasrallah, a food writer and researcher who has written a book about dates, suggests mixing date syrup with equal parts of tahini for a dip. Dried dates can be used for making a "cupid's omelette", suggests Nasrallah, which is "believed to be aphrodisiac, especially if served with a small glass of milk or carrot juice". (Mix 90g chopped dates and 2 tbsp butter in a medium frying pan and heat until the dates soften. Pour over three eggs, slightly beaten, and carefully fold until set. Sprinkle with salt, pepperand cinnamon.) "Share the dish with your significant other," says Nasrallah, "but plan on having the house for yourselves."

The fruit is less known in its fresh form in the UK. "In the Middle East, we eat them fresh in the summer," says Nasrallah. "In Iraq, we call these Berben dates. Buy them when they are half sweet and half crunchy. They should be an orangey yellow, with parts of the fruit starting to turn brown and tender."

Tamimi buys unripe yellow dates and freezes them to eat like ice cream. And if you aren't bowled over by the varieties of dried dates you have tried, Nasrallah suggests thoory, also known as ashrahi. "They are dry and like candy. Oh my God, after eating this you will never have toffees again."

Not for nothing is the medjool known as the king of dates. Photograph: Alamy