'Ambadi' also known as 'Gongura' in Telugu is the miracle local green which offers a range of health benefits which lay hitherto unexplored. 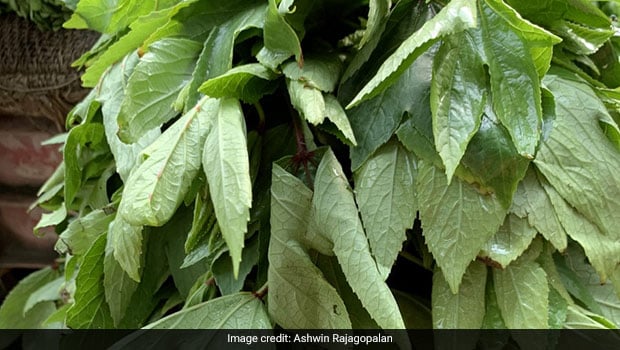 The year 2020 marks the return to Indian superfoods instead of their foreign counterparts. There is an increasing emphasis on sourcing foods that are locally produced every season, rather than the exotic ones which are not so readily available. Celebrity Nutritionist Rujuta Diwekar recently shared one of these gems from the Indian cuisine which not many people know about. 'Ambadi' also known as 'Gongura' in Telugu is the miracle local green which offers a range of health benefits which lay hitherto unexplored.

(Also Read: The Magic Of Gongura, Andhra's Most Loved Spinach)

Ambadi is scientifically known as Hibiscus Sabdariffa. Some people also know it by the name 'Roselle' plant. It has green leaves and long red stems and is taller than other greens and also more acidic. Celebrity nutritionist Rujuta Diwekar called it the 'stomach soother' in her Instagram post, highlighting its benefits for overall health. It is a great source of Folic acid and Iron and aids in relief against constipation. Since it digests slowly, it helps nurture the gut ecosystem too which is essential for the bodily functions.

Rujuta Diwekar further wrote about how this leafy green is the one that does not get spoilt during the monsoon season. The slightly acidic nature of Ambadi is what prevents it from getting infested with microorganisms. Talking about how to consume it, Diwekar said, "Always eaten with roti/bhakri made of makai, jowar, ragi, etc, and these food combos make for low glycemic index meals." You can also make a delicious chutney with it, also known as Gongura Pachadi in Andhra and Tamil Nadu.

So, revisit your roots and stock up on this wonderful native green to load up on good nutrition and good health.