Dinner in 25 Minutes, A Bowlful of Bow Ties: Recipe 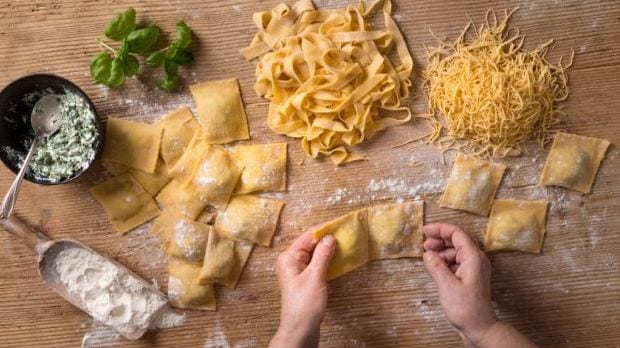 Highlights
Your average pasta with vodka cream sauce often comes with a choice of two sides: regret or a damn-the-calories attitude. But this recipe, plucked from the pages of a new cookbook that pairs menus with classic movies, puts a more positive spin on the dish. (It was suggested as an accompaniment to the 1933 film "Female," because the movie "ends with a kick.")

Instead of the usual canned tomatoes, a roasted red pepper puree and mere tablespoons of tomato paste - plus a little garlic - make the sauce base, with no added fat. The result is zesty and bright-tasting, and there's just enough of it to cling to tender bow ties. The typical amounts of vodka and heavy cream are reduced; because the liquor doesn't cook for very long, you become aware of its role as a flavor enhancer.

There's so little prep work involved, you'll be able to sit down with a bowlful in no time.

A spoonful of salmon roe or an ounce of jumbo-lump crabmeat would elevate this to special-night status. Serve with a side of sauteed or roasted broccoli rabe.

Bring a pot of water to a boil over medium-high heat. Add a generous pinch of salt, then the pasta. Cook according to the package directions (to al dente). Drain the pasta and return it to the pot.

Meanwhile, drain the roasted red peppers and place in a food processor. Coarsely chop the garlic and add to the peppers. Puree until smooth, then pour into a medium saucepan. Stir in the tomato paste, crushed red pepper flakes and vodka. Cook over medium heat for a few minutes, stirring often.

Taste the sauce: It should be a little sweet; the vodka acts as a flavor enhancer and doesn't really evaporate. If the sauce seems bitter, add the sugar, stirring until it has dissolved.

Reduce the heat to low; stir in the cream until well incorporated. Taste again; add salt as needed. Pour the sauce into the pasta and toss to coat evenly.

Stack and roll the basil leaves; cut them crosswise into thin ribbons. Divide the sauced pasta between individual bowls or plates; sprinkle with the basil and lots of pepper. Serve hot.