Easter Recipe Hacks: How to Upcycle Your Hot Cross Buns 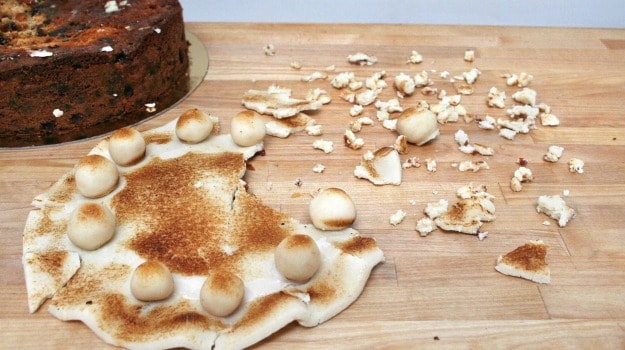 Marzipan fatigue? Transform that icing into toasted ice-cream and break up your egg shells for a salted chocolate fudge sauce

Easter, like Christmas, has turned into a time of sweet excess, but with decidedly fewer seasonal goods doing the rounds – hot cross buns, Easter eggs, simnel cake – many of us have had enough of them before Good Friday has even begun. Whether you find yourself with leftover chocolate (“What’s that?” I hear you cry) dampened by dew from an Easter-egg hunt, or you’re suffering from marzipan overload, try these Easter lunch hacks to stop yourself needlessly buttering – or binning – that 21st hot cross bun.

Sick of simnel and bored with buns

If no one is convinced by a kindly relative’s gift of simnel cake, peel the marzipan lid off and turn that icing into ice-cream. A further stint under the grill (it tends to have had a cursory one for aesthetic reasons) does something quite brilliant to this almond paste, intensifying its flavour while transforming its texture. Crumble it into little pieces first and watch as the heat turns malleable blobs into crispy, caramelised nuggets – providing a welcome chew when stirred into ice-cream before its final freeze. You may not need to use all the marzipan – add it to taste.

The simnel’s sponge interior makes it well qualified to form the backbone of a host of puddings, from a trifle to the base of a queen of puddings or baked Alaska. Even a good old bread and butter pudding would work; using cake rather than bread might sound a little heavy, but if you were to alternate each slice with regular bread and avoid a cream-based custard mix in favour of a milk-based one you’d be heartily rewarded. Of course, the true star of the Easter bread and butter pud is the humble hot cross bun, whose springy softness makes for a delightfully pillowy version. It makes sense, then, that a hot cross bun soaked in an egg mixture – further spiced if you will, as it is the season of sweet spice – and turned into french toast will make for a very successful bank holiday Monday brunch.

If you can’t be bothered with extra cooking, blitz any buns or cakes in a food processor, toast straight away for added flavour then freeze – panko and standard white bread crumbs are great, but sweetened crumbs add a totally different dimension, and can be grabbed by the handful straight from the freezer for all sorts of recipes. You could knock up some granola and run the crumbs through it to sweeten, or sprinkle them straight on an open apple tart. Seeing as raisins and lemon are already present, you could pop some toasted pine nuts and a minced anchovy into the mix and use them to stuff smaller oily fish or to top larger meatier fillets.

Cheesed off with chocolate eggs

Sugar-shelled chocolate eggs can’t be resurrected, so should be chomped through as a priority, but those made entirely of chocolate can be reincarnated as something else. Because this chocolate has been melted and moulded in a previous life, it can be a little unstable to work with once re-melted. It’s fine for fondue-style dipping - knock yourself out dunking pretzels, biscuits, fruit and nuts, but don’t use it to coat anything you’ll then cool down, because, unless you temper it again, you’ll get white streaks appearing across your handiwork.

Far better to use this untempered chocolate in something cooked – cakes, biscuits or brownies. But given that chocolate fatigue will surely have set in by this stage, I’d opt for something with a longer shelf life, like a salted chocolate fudge sauce, ideal for blobbing into the marzipan ice cream recipe below, or spooning on top. As chocolate eggs (excluding high-end choices here) tend to lean towards the sickly sweet, this recipe is heavy on the cocoa to give your resultant sauce some chocolately depth – both in look and in flavour.

Place the first five ingredients in a heavy-based saucepan and heat over a medium heat until the sugar melts and everything comes together. As soon as it comes to the boil, reduce the heat and cook gently for five minutes, stirring constantly.

Turn the heat off and toss in the butter and chocolate pieces. Stir until smooth. This thick, unctuous sauce can be cooled and dolloped into the marzipan ice cream before it freezes, or gently heated and spooned on top. If you let it, it will last several weeks in a jar in the fridge.

Crumble the marzipan into roughly pea-sized pieces, spreading two thirds on a lightly oiled baking sheet and reserving the last third. Place the baking tray under a hot grill to toast the marzipan nuggets, letting them darken but being careful not to let them burn. Remove and allow to cool and harden slightly before transferring to a bowl and reserving for later.

In a saucepan, gently warm the cream, milk, salt, and remaining crumbed marzipan. Heat the mixture until it almost comes to the boil, stirring to prevent the marzipan sticking to the bottom, then remove and allow to infuse for 20 minutes.

In a large bowl, whisk together the egg yolks and sugar until thickened and pale yellow. Returning to the pan, whisk the milk and cream to make sure all of the marzipan pieces have melted into the liquid, then gently reheat for a minute before pouring the warmed liquid over the egg yolk mixture, whisking constantly until combined. Pour the contents of the bowl back into the saucepan and return to a low heat. Cook, stirring constantly, for between five and 10 minutes. When the custard has thickened, leave to cool with a piece of clingfilm against its surface to stop a skin from forming.

When cool, you can either freeze the ice-cream in an ice-cream maker, or in a plastic container in the freezer. If you do the latter, you should remove it from the freezer after an hour and process it again. Repeat this several times.

Marzipan detached from a simnel cake can be toasted and stirred into ice-cream.  Photograph: Henrietta Clancy