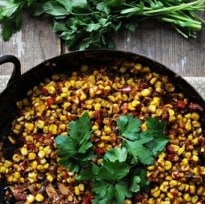 Corn is best straight off the cob fresh from the cornfield, but these recipes are the next best thing to coax the sweetness from sweetcorn

Sweetcorn is best served fresh. Really fresh. There's a farmer I know who, on mild evenings at this time of year, likes to stroll down to his cornfield with a stool, a portable gas stove, a pan full of water, some salt and a little butter. He sets himself up in the field and as the sun sets, boils and eats a perfectly fresh cob. He swears there is not a dish on this whole earth to beat it.

The day I first met my collaborator on this column, Jane Baxter, I told her this story. At the time she was running Devon's Riverford Farm Field Kitchen - a restaurant literally in the middle of a field, which was filled with towering maize stems.

"I know an even better way to eat corn," she insisted. "Go into the field, pull a cob off a plant and eat it. Go on." And she shooed us and our children out into the field, where we stripped the husks and the silky fibres from the bulging cobs and sank our teeth into them. Jane was - as she always is when it comes to matters of food - right. Best corn I've ever eaten.

If you are lucky enough to live within metres of a cornfield, these are the only recipes you need for corn (though if I were cooking it in the field, I might melt the butter and add a little white wine vinegar and ground black pepper, just to jazz things up a little). But most of us must content ourselves with corn that has travelled some distance - which it doesn't do particularly well. As soon as the corn is picked, the sugars in the kernels begin to change into starch. Most varieties convert more than half their sugar within 24 hours.

Shop-bought corn is still sweet, and has that lovely milky flavour; it just needs a little more assistance to be served at its best. Here are some of our favourite ways of doing that.

A note on tinned corn: all of the recipes below can be made with tinned corn (although it is tricky to char on a griddle - try grilling it instead). Tinned corn will not give you the satisfying popping texture of fresh corn and the flavour is generally blander, but it will still taste good.

1 Put the first 6 ingredients into a large heavy-based pan over a medium heat and cook for about 15 minutes. Turn the heat down if the onions start to catch on the bottom of the pan.

2 Cut the corn kernels from the cobs: hold the cob by the stalk, rest the point on a steady surface, use a sharp knife and cut away from yourself. Then add the corn to the onions with the garlic. Turn the heat up and stir constantly for about 10 minutes. The corn should be slightly brown and caramelised.

3 Add the wine and scrape the bottom of the pan with a wooden spoon. Season well. Add the stock and simmer for about 15 minutes or until the corn is cooked through. Check the seasoning and top with chopped parsley.

1 Preheat the oven to 180C/350F/gas mark 4.Mix the sweetcorn, sugar and salt in a large cake tin. Separately beat the eggs, mix with the cream, then pour this mixture on to the corn.

2 Add the melted butter and stir well. Sprinkle with the nutmeg and put in the oven. Bake for around 35-40 mins or until set. Test by inserting a knife or skewer: if it comes out clean then it is ready. Sprinkle the cress over the top and serve. And if you haven't the time make it yourself, Andi has put it on the menu at the Jackdaw and Star, her London pub.

What else you can make with corn

• Creamed corn
When the corn is cooked, remove a third, pass through a food mill, then return the puree to the rest of the corn for a more creamy result.

• Corn with chard
Add chopped cooked chard or spinach to the finished corn and warm through. This is great with roast chicken.

• Ecuadorian potatoes and corn
Mix corn kernels with waxy potatoes, butter, little pieces of fried bacon and a shot of white wine vinegar. In Ecuador one of the most popular street dishes is boiled potatoes and large corn kernels, mixed with fried bacon and bacon fat. It is served from a large plastic sack in which they retain their heat for many hours.

• Griddled corn
Char your corn on a griddle then eat it simply with butter and lemon juice. Or slice off the charred kernels. You can mix this with softened leeks as a side vegetable (or soft leeks and flageolets for a main) or stir them into a guacamole.

Corn braised in white wine and butter ... it doesn't get much better than this. Photograph: Jill Mead for the Guardian