Ebola Could Lead to a Food Crisis 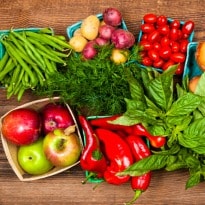 Financial aid and global coordination are needed to prevent the Ebola health care crisis from becoming a food emergency, agriculture ministers from West African nations at the center of the Ebola epidemic said. In Sierra Leone, where thousands are infected and more than 900 have died, 40 percent of the nation's farmers have abandoned their fields, said Joseph Sam Sesay, minister of agriculture, forestry and food security.

The nation's economy was expected to grow more than 11 percent this year until Ebola struck in May. Now growth is only predicted to be around 3 percent, he said.

Liberia Agriculture Minister Florence Chenoweth says billions of dollars of outside agricultural investment is gone as farming has been decimated. Liberia expected 9 percent economic growth but has ratcheted it down twice to about 2 percent, Agriculture Minister Florence Chenoweth said. The nation had attracted $17.6 billion of foreign investment of which $7 was for agricultural development but those investors have left.

Still, she says no one is giving up and a recovery plan has been developed. "We are very determined, very resilient people," she said. "We have not as ministers of agriculture put forward a recovery plan for nothing. We will implement that plan... and rebuild our country's agricultural sector."
Listen to the latest songs, only on JioSaavn.com
Kanayo Nwanze, president of the International Fund for Agricultural Development, a financial institution of United Nations based in Rome, said the Ebola epidemic is strangling regional trade and it could "lead to a hunger crisis of epic proportions for West Africa." International help is needed now with food assistance and medical help to stem the spread of Ebola, he said.

"It is unfortunate that the international community does not look up to crises when they occur in what I call the forgotten world, the invisible world where people die in rural areas from drought or disease until it grows out of proportion or until it begins to effect the larger international community," he said. "When there's a crisis in Timbuktu it doesn't stay in Timbuktu anymore. Nowadays it reverberates in Paris, London, Berlin, and Washington."