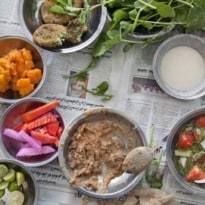 On a trip to Cairo, Anissa Helou shops in the abundant street market and learns how to make perfect koshari.

Unlike Lebanon, Syria and Turkey, Egypt doesn't really have a restaurant culture although it does have an exciting street food scene. And it is on the street that I do most of my eating when I visit, albeit being careful as to which cart I stop at. However, on a recent trip to Cairo to research recipes for our London cafe Koshari Street, I spent an evening with Magda, a wonderful home cook. As I watched her prepare our meal, tasting as she went along to make sure the seasoning was absolutely right, I decided that Egyptian food at its best could rival the better known Middle Eastern cuisines.

Many of the dishes are shared with other countries but because Egypt straddles the Middle East and North Africa, there are noticeable differences. Magda's meal included a selection of vegetarian-stuffed vegetables, including vine leaves which were in season (so much better fresh than preserved), green peppers, cabbage leaves and both white and purple aubergines.

She also prepared stuffed intestines (mumbar) and the street food dish koshari. None of the dishes were new to me. Except for koshari, you find them throughout the Middle East, but some of her methods and combinations were a revelation. In Lebanon, we make vegetable stuffing with fresh tomatoes, dicing them into tiny cubes for the vegetarian version while crushing them for the meat dish. But Magda made a thick sauce with her tomatoes, cooking them down with finely chopped onions and olive oil before adding them to the rice and herbs, giving the final dish a richer texture and deeper flavour. Her seasoning also included chilli for added heat, another Egyptian touch.

Depending on which country you are in, some vegetables are stuffed and cooked together while others are done separately. No one in Lebanon pairs vine and cabbage leaves. They cook vine leaves with lemon juice added to the cooking broth, and prepare them either with meat or vegetables while they finish the cabbage, which they only stuff with meat, with dried mint and crushed garlic. Courgettes and aubergines are always paired and can also be done with meat or as a vegetarian dish.

Magda cooks her vine leaves in a separate pot but puts all the other vegetables together. I was intrigued to see her use white aubergines, which I had seen in the markets and are rare in Lebanon and Syria. Whenever people use them there, it is to make makdous, where the aubergines are stuffed with walnuts, chilli peppers and garlic, and preserved in olive oil.

As I watched Magda stuff the intestines - with a different rice filling where the tomatoes were fresh - I wondered if she had bought them from the jolly offal seller behind the Hussein mosque, a fabulous Fatimid building with minarets that tower over a lively food market running through a warren of narrow medieval streets.

Here, spice merchants mix herbs and spices on the floor of their stall, and pickle makers dip into huge vats to scoop out brightly coloured pickles which they bag up to send to neighbouring cafes or to sell in their narrow stall at the front. Meat sellers butcher carcasses right on the street. Some have beef, others lamb and a couple specialise in camel. Naturally the camel carcasses are the largest.

Greengrocers are scattered throughout with some specialising in one type of vegetable or fruit. One turbaned old man sells lettuce and mint while another stacks his watermelons in a neat pyramid. Some lanes open out to covered markets where vendors decorate their stalls with murals, some with suras (verses) from the Qur'an and images of saints.

Interspersed between all this abundance are the live bird sellers who kill and pluck your chicken, pigeon, duck or turkey on the spot for you to take home and cook.

Magda's stuffed intestines were our meat dish for the night and, again, she made hers differently, frying them after poaching to brown and crisp up the casing. Just as good as my mother's version which is only poached.

Egyptian food may not be as celebrated as other Middle Eastern cuisines, but prepared by the right cook it is delectable, and made even more so by the wealth of seasonal produce everywhere you go.