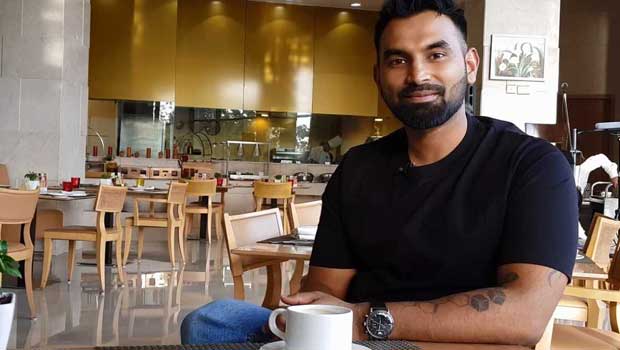 Bengaluru-based pastry chef Vinesh Johny needs no introduction. The 29-year-old co-founder and executive pastry chef at Lavonne Academy of Baking Science & Pastry Arts has featured in many coveted lists and is also the pastry expert and mentor at WorldSkills Competition. We caught up with Johny when he came to Delhi recently for WorldSkills and he told us all about his journey and what keeps him inspired to teach this niche skill to thousands of aspiring pastry chefs in the country. Johny was pretty excited to talk about his brain-child- the academy- as well as their state-of-the-art baking studio and now a newly-opened eponymous café called Lavonne Café, which showcases the work of the students at the academy. The café gives the institute's students a chance to learn on the job and build confidence.

Here is an excerpt from the interview (the full interview is now live on our Facebook page):

1. When did you know you wanted to be a pastry chef?

Answer: I always didn't know I wanted to be a chef. The first time I got to know about the profession was when I met a student from a hotel management college and he told me about what a great time he was having in college and all the fun things he was doing. I was attracted to the entire craft that he was doing. The funny thing is, I've always been cooking with my brother when I was younger. We used to take the dishes that my mum had prepared and we used to try and tweak them a lit bit. I found a connection between what I used to do when I was younger and how interested I was when my friend was explaining about his life in a hotel management college. That's when I jumped in this industry.

2. Why did you think of starting a baking academy?

A: When I came back to college to specialise in bakery and confectionary, I felt like what we were doing was not good enough. I wanted to find a place to fine-tune my skills. But the only options that were there, were outside of India. I felt like there was a big void in that entire situation because there were a lot of students like me, who would want to upgrade their skills, but who didn't have the means or the money to go to France or go to Australia to do it. That was the time the idea popped up and I felt like, at some point I want to open a school that is going to teach Indian kids how to make beautiful desserts. That's how Lavonne came about.

3. How can you tell whether a student is going to be a great pastry chef?

A: It's a mix. How I know a student is going to make a great pastry chef, I think firstly it's (by) the passion and dedication that they show. Especially in a craft that is so new to you, you don't just put a 100 per cent, you put a lot more than that. You're always intrigued, you're always curious, you ask a bunch of questions even if it's a question that is obvious to somebody, it's okay to ask that question. It's somebody who is absolutely dedicated to learn the fundamentals completely.

4. What are some baking tools that pastry chefs can't do without?

5. What are the golden rules of working with chocolate?

A: When it comes to chocolate, it's important to understand what flavour notes the chocolate has, so that you can figure out how you'd want to pair that with the flavour notes you're going to incorporate into it. If a chocolate has a fruity flavour, you'd use it with fruity ingredients. If it has a caramel note, then maybe with some hazelnut or coffee. But also temperatures are very crucial while working with chocolate. It's important to have a nice, clean surface area, very cold marble table, (the room is) air-conditioned well. But also your skills of working with chocolate.

Also Read: How To Temper Chocolate: Everything You Need To Know

Watch the full interview with Pastry Chef Vinesh Johny below: