FIFA World Cup 2014: Where to Eat in Manaus, Brazil 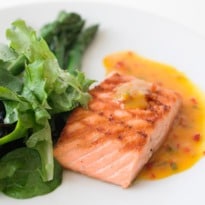 The 20th FIFA World Cup will kick off in Brazil from 12 June to 13 July this year, with a total of 64 matches to be played in twelve cities across Brazil. With thousands of football fans all set to descend upon this beautiful country, what will be better than fusing food and football? The Brazilian jungle city of Manaus is home to exotic dining options, from the tart "mari mari" fruit that looks like a giant string bean to barbecued fish ribs from the giant "piracuru" to soup made from flesh-eating piranha.

Some places to sample local delights:

O CANTO DA PEIXADA: This fish restaurant of plastic tables and chairs on the sidewalk is the stuff of local legend. Pope John Paul II ate here in 1980. An extensive menu, translated into inventive English, features a variety of river fish served in every imaginable way. Avoid the "half tambabqui," which is among the few farmed fish on the menu.

CHOUPANA: A slightly higher-end fish joint where a light "calda de piranha," or piranha soup, is the amuse-bouche. "Tambaqui" ribs are a perennial favorite.

TRATTORIA DA MARGO: Offers mouthwatering Italian food, with scrumptious pasta sauces created by Manaus native Margo Gois, who is self-taught and never been outside Brazil. Getting there adds to the adventure -- the restaurant is tucked in the Parque Dez de Novembro residential neighborhood and few taxi drivers seem to have heard of it.

LANCHE TRES MULHERES: Tucked in one of two food courts flanking the Adolfo Lisboa Municipal Market, this stand serves delicious "biju," or tapioca omelets. Bijus, which run about $2 a piece, come stuffed with a selection of banana or cheese slices, fried eggs or crushed Brazil nuts, but the tastiest version includes a bit of everything.RESTAURANTE DA TINA: For a taste of true "caboclo" food, enjoyed by Amazonians of mixed indigenous and European ancestry, try this hole-in-the-wall in the back of the Feira Manaus Moderna. The house favorite, "fried tambaqui," features a thick slice of fried freshwater fish atop a giant bowl of rice, beans, spaghetti and fried manioc flour known as "farofa." For an adventuresome dessert, check out the fruit stands teeming with exotic treats.

WAKU SESE: A chain of three comfy cafes and more than a dozen stands whose excellent coffee isn't the main attraction. That's acai, a slush made from frozen purple berries produced by an Amazonian palm tree. With its high-calorie content, acai is eaten as a power breakfast or a midafternoon pick-me-up. Mix in crumbled peanuts and cashews for extra punch.