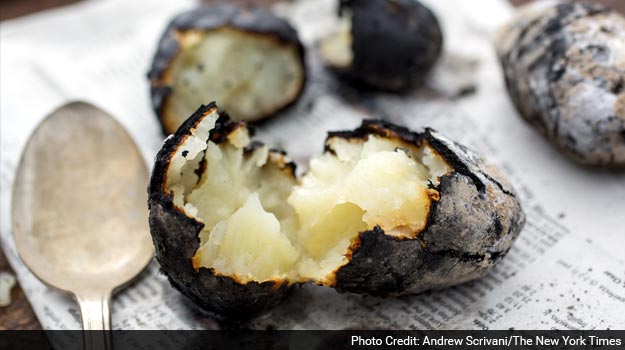 Some kids grow up with backyard grills. Others have campfires, clambakes or pig roasts.
In postwar Brooklyn, my parents had potatoes they roasted in bonfires they built with other neighborhood children in empty lots.

Roasting potatoes in the ashes is a long-standing practice that became especially prevalent in New York during the Depression, when people were hungry, potatoes cheap and empty lots around the city plentiful, said Annie Hauck-Lawson, co-editor of the 2010 book “Gastropolis: Food and New York City.”

The kids built fires to keep warm in the winter or to have something to do in the summer. They took garbage cans, some wood, maybe a broken-down vegetable crate or some sticks, and threw in potatoes for a snack. When the fire died down and the potatoes had turned black as soot and soft when poked, they were ready.

They ate them wrapped in newspapers to save their fingertips, cracking open the burning potatoes like eggs, carefully biting at the white interior. There was no butter, no salt. But the potatoes were delicious, tasting of wood smoke. The intense heat made them seem richer and deeper, though slightly acrid when you accidentally ate some of the ashen shell.

Usually it was the boys who roasted them, but my mother was an exception. She showed up at the vacant lot near Avenue U, pockets bulging with enough potatoes for the whole gang, and the boys let her stay. She was tough, and appreciated their acceptance almost as much as the potatoes themselves.While most of the neighborhood kids abandoned those ash-roasted potatoes when they grew up, my parents held on, substituting our fireplace or the charcoal grill for the empty lot and trash can. We ate them on plates with a spoon, glossed with butter, liberally salted.

At some point when I was in high school, we stopped making them, forgetting about their fluffy interior and earthy flavor and losing a link to my parents’ childhood.

But this summer, now that my daughter is old enough to appreciate both a good family story and a near-burned potato, I lit the grill and threw some Yukon golds into the coals. My husband cooked a steak on top of the grate, and then we dug into the ashes with tongs to retrieve our blackened prizes.

There are few empty lots left in our part of Brooklyn, yet we savored those creamy potatoes just as my parents must have done, long ago but not far away.

6 potatoes, any kind (or use as many as you like)

Listen to the latest songs, only on JioSaavn.com
Preparation

1. Build a large and very hot charcoal fire. Put the potatoes in the fire, burying them completely (you can cook something else on top of the grill as the same time). The potatoes will be done after anywhere from 45 to 90 minutes, so keep checking them by piercing them with a skewer. When they feel soft on the inside, they are done. Let cool slightly before eating.

Comments2. To eat, slice them open and serve with butter and salt on the side for each person to season the potatoes to taste. A spoon is the easiest way to get to the tender potato flesh. Don’t eat the burned shells.
© 2015 New York Times News Service