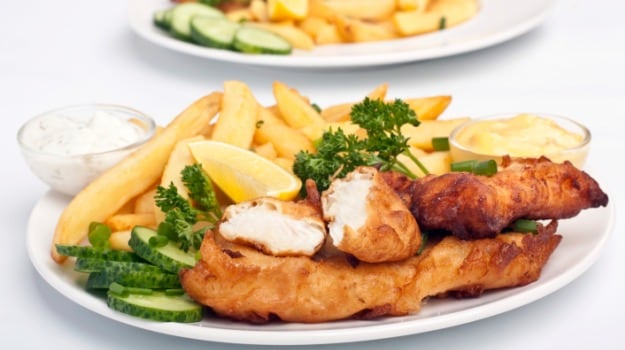 A slab of battered fish on top of a heap of chips doused in salt and vinegar has long been one of Britain's favourite dinners -- but now it is getting a reboot. A new wave of fish and chip restaurants is winning fans across London, while some of the capital's most exclusive eateries have the humble dish on their menus.

The makeover for a meal which is nearly 200 years old comes despite the enduring popularity in Britain of fast foods such as curries, kebabs and burgers.

Organisers of Britain's annual National Fish and Chip Awards boast of 10,500 "chippies" around the country, saying some £1.2 billion (1.6 billion euros, $1.8 billion) are spent on the dish annually. The organisers stressed the nutritional value, saying it was high in protein and contains vitamins while insisting that little saturated fat gets into the dish due to the speed of the frying.

At Poppies, which has branches in the fashionable London districts of Camden and Shoreditch, staff dress in retro 1950s uniforms while live bands, or the jukebox, serenade eat-in diners but the recipe is strictly no-fuss.

Owner Pat Newland, who has been serving fish and chips for over 50 years, said that, when it comes to the food, there are no gimmicks.

"There is no secret, no magic tricks -- you have to do the job properly," he added. "It is definitely a healthy meal -- some people only eat the inside." At other new generation fish and chip restaurants in London, the fish is served in beer batter, fine wines and craft beers are served with food, while diners can order side dishes such as fennel and dill salad.

Fish and chips also grace the menus of some of the capital's top restaurants, often costing several times the price of a regular takeaway. J. Sheekey, a celebrity hangout in the heart of theatreland, serves haddock and chips for £18.25 (24 euros, $27).

For a traditional fish and chips, the fish is dipped in a thick, tempura-like batter made from flour, eggs and milk before being deep-fried, while the chips are cut thicker than French fries. The fish itself is traditionally cod or haddock although some shops now serve a range of fish including rock and coley, helping cod stocks to recover.

Fish and chips is sometimes served with mushy peas -- a soupy reduction of dried peas with sugar and salt -- or scraps of leftover batter from the deep-fat fryer. Most Britons still buy their fish and chips at no-nonsense takeaway shops where any mention of fennel salad would be snorted at as pretentious.

Last month, Britain's best fish and chip shop was named as Frankie's in the Shetland Isles, off the northeast coast of Scotland -- about as far from London both geographically and culturally as anywhere in the country.

John Gold, the shop's manager, attributes his success to the freshness of his fish rather than any fleeting fashion.

(How to Make the Perfect Tartare sauce)

"The fish is from the North Sea. It just comes off the doorstep, you can't get any fresher," he said.

He hailed fish and chips as a dish which crosses class and geographic divides and is "part of British culture." "Everybody loves fish and chips, everybody can tell you a story when they first had their fish and chips in the days when it used to be wrapped up in newspapers," he said. "Even Prince Charles."