How to Make the Perfect Tartare sauce 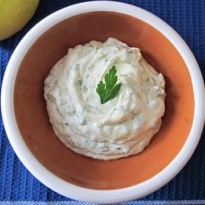 Salad cream in all but name or the perfect accompaniment to fish and chips? And is it best made sweet or sour?

Tartare sauce, that piquant gloop found in chippies and fancy fish restaurants alike, was not, you will unsurprised to hear, everyday fare on the windswept steppes of the ancient Tatar people. Instead, it has assumed the name of the more traditional Tatar dish of chopped raw meat, which it often accompanied in the fashionable dining rooms of 19th-century Europe - it seems unlikely that the warring tribes had much time for making condiments to serve with their stringy supper.

These days, it's usually served with fish - indeed, chef Trish Hilferty describes it as "the ultimate partner for fish and chips", its salty sour flavours proving the perfect foil for the greasiness of battered haddock and fried potatoes. But I usually pass on a sachet in my local chip shop - at once cloyingly sweet and unpleasantly vinegary, it's only worth it in places that actually make their own version, which is probably why Nigel Slater worries that it's "in danger of going the way of true salad cream". All the more reason to make it at home.

Mayonnaise is the classic choice, used by Trish Hilferty in Lobster and Chips, and Saveur magazine, but Slater, although he gives a recipe with mayonnaise, says, "I often use creme fraiche; the lactic quality of the cream is a supremely successful modern twist," and three-starred Paris restaurant L'Ambroisie, whose recipe is given in the Essential New York Times Cook Book, suggests well-chilled and whipped double cream. We find both twists far too rich, even when served with poached, rather than fried fish - indeed, the Parisian version is judged "more like a cream cheese dip". Constance Spry, meanwhile, makes a curious mayonnaise with cooked, as well as raw, egg yolk. Though I rub the hard-boiled yolk through a sieve as she directs, I find it still gives the sauce an off-puttingly furry texture. She also suggests finishing it with a little cream, but again, this takes it into queasy territory for me.

Straight mayonnaise it is, then. Adding mustard, as Slater and Hilferty suggest, works brilliantly with the other flavours but, like Slater, I'll be using a blend of olive and flavourless oils, rather than Hilferty's bland vegetable oil, or Spry's rather too flavourful olive oil (the mind boggles at what half a pint of olive oil must have cost in the mid-1950s, when her Cookery Book first came out).

The salt and the sour

As Slater observes, the magic of tartare rests with "the correct balance of piquancy and creamy blandness ... stint on the gherkins or capers ... and you will have a sauce that is too sweet to perform its function". These two pickles are mandatory, though which variety to go for is largely a matter of personal preference. I like salted capers, well rinsed, and the firm crunch and sharp acidity of the little cornichon, rather than the mushier brined capers, or the sweeter, softer dill pickle, but each to their own. One sort you ought to steer clear of, however, is cucumbers in brine, which will conspire with the capers to make the whole thing too salty. Slater is the only one to leave his capers whole - this adds texture, but with strongly flavoured fruit, can be a bit overpowering, especially if you end up with two in a mouthful.

Some recipes, like that from L'Ambroisie, rely on gherkins alone to provide the necessary sour element, but most add something extra - Spry recommends vinegar, Slater, Hilferty and Saveur magazine prefer lemon juice, but in a stroke of genius, the last cuts it with the pickling liquor from the capers and gherkins, which supplies just the right level of acidity on its own, no lemon or extra vinegar required.

Those green flecks aren't just for show; fresh herbs lend a welcome freshness to proceedings. Parsley is the most popular choice, and rightly so - its peppery heat works brilliantly. Hilferty and Slater use tarragon, too, but though its aniseedy flavour is a natural friend to fish, it's a bit sweet in this case. Spry calls only for fresh herbs which, still reeling from Hilferty's pungently alliaceous shallot-spiked sauce, gives me the chance to try adding chives instead. Their milder flavour proves a far better complement to the other ingredients. L'Ambroisie puts paprika in their tartare sauce, which just succeeds in turning it pink, while Slater admits he sometimes throws in some Tabasco; a far happier choice if you'd like some extra heat, but not strictly necessary in a classic version.

The question of extra egg divides the tartare testers; some like the texture of the chopped hard-boiled variety in Hilferty and Spry's sauces, while others complain they make them taste too, well, eggy. They are mayonnaise-based, after all. With battered fish, I'm inclined to the latter viewpoint, though I can see a case for adding it if serving with more simply prepared seafood. Better as a rule, however, to keep tartare all about that salty sourness, and let your jumbo pollack and chips do the talking.

How to make the perfect tartare sauce

Mix the egg yolks, salt and mustard together in a food processor, or with electric beaters, or a whisk. Once well combined, very gradually drip in the oil, beating all the while, until you have mayonnaise - don't be tempted to add it too fast, especially near the beginning, or it will curdle. It will be very thick at the end, but don't worry, the pickling liquor will thin it down.

Stir in the pickling liquor, followed by the remaining ingredients. Taste and see if it needs seasoning, or indeed any extra pickle juice. Serve at room temperature.

Tartare sauce - an essential part of a fish supper, or, like bread and butter, or mushy peas, merely an optional extra? Why is the ready-made stuff so bad (does anyone like sweet tartare sauce?) and what else do you serve it with; steak tartare?