A British Crisps Company has recently created the World's longest puffcorn, and this won them a place in the Guiness World Records. 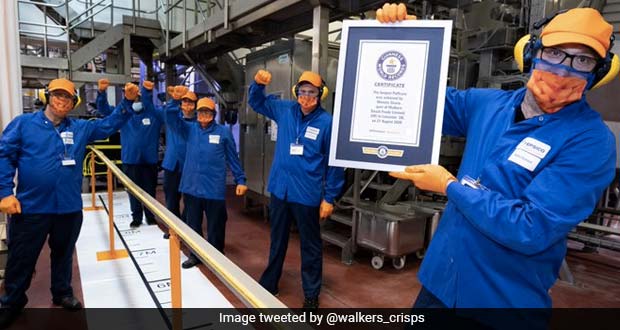 'Wotsits Giants' has created the world's longest puffcorn at 10.66 metres.

If there's one snack that is unbeatable in terms of binge-ability, it has to be chips. Once that addictive bag of chips opens up, it takes a lot of willpower to stop ourselves from finishing the entire packet. Puffed corn or puff corn is also one delicious snack which chips lovers cannot get enough of. Did you know that there is an actual record in the Guinness World Records for the longest puffcorn?! Yes, you heard that right! A British Crisps Company has recently created the World's longest puffcorn. Take a look at the video:

Congratulations to Wotsits Giants (@walkers_crisps) who have created the longest puffcorn!

Measuring 10.66 metres in length, Wot do you think of this tasty snack? ???? #WorldRecordWotsitpic.twitter.com/BXmPAuuNXT

The video of the milestone was shared on the official Twitter handle of Guinness World Records. According to their post, the record for the longest puff corn in the world has been created by British Crisps Company 'Wotsits Giants' based in Leicester, United Kingdom. They are a part of the Walkers Snack Foods group which is widely popular in the country and has been around since 1948.

According to the video, the Wotsits Giants had been working on creating the record since several months at end. They had to reinvent the entire process of making the long puff corn since their factory's facilities were not programmed to create it. The Giants slowly and steadily made their way to the longest puffcorn, which is a whopping 10 metres and 66 centimetres in length!

Say hello to the World's Longest Wotsit - over 10 metres in length ???????? #WorldRecordWotsitpic.twitter.com/QP8qMuyPBK

Netizens couldn't help but imagine how delicious the record-breaking snack would taste. Take a look at some of the reactions:

My dog would devour that 10m wotsit in seconds, he loves them, I have to fight over a normal packet with him

What do you think of the long puffcorn? Would you try to eat such a bizarre creation? Tell us in the comments below!