Food trends in 2014: from digital dining to healthy junk food 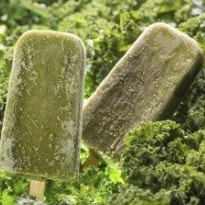 The future of food includes holographic chefs, smart knives and egg-white crisps, according to trend analysts. But will kale ice lollies and edible soil ever catch on?

It is a blustery winter morning in Mayfair, London, and 100 or so well-heeled representatives from the advertising and retail worlds are huddled in a lecture theatre at the Royal Institution. This is the future of food, according to Stylus, an "innovation, research and advisory firm" that scours global markets to pinpoint the most influential emerging trends for companies such as Saatchi & Saatchi, Bacardi and Hotel Chocolat.

Edible QR codes
Harney Sushi, a restaurant in San Diego, has attempted to tackle the problem that 52% of Californian seafood is supposedly being mislabelled, by devising edible rice paper QR codes. Using smartphones, diners can call up detailed information about the provenance and global stocks of the fish they've ordered.

Interactive cocktail lounges
Logbar in Tokyo issues customers with iPad Minis upon entry. The menu is on the tablet, which you can also use to communicate with other drinkers and view, "like" and order what they're drinking. You can even invent your own cocktail and add it to the menu, earning a 50 yen (about 30p) commission when someone else buys one.

Holographic chefs
A finalist in a cutting-edge product design competition, Electrolux Design Lab, plans to bring top chefs into users' kitchens for tutorials via the medium of hologram.

Burger-bots
Momentum Machines' robot churns out 360 gourmet burgers an hour, chopping all ingredients as it goes so that everything is fresh, fresh, fresh. Orders can be customised, too. You want a patty of one-third pork and two-thirds bison? No problem.

Smart knives
Another Electrolux Design Lab contender is a knife that can check levels of harmful bacteria, pesticides and nutrients such as sugar, vitamins, protein and fat in the food it cuts. It also emits negative ions to help keep the food fresh.

Alcohol-aware ice cubes
Keep one of these in your glass and it will warn you when you're guzzling too fast, and send a text message to a close friend if you ignore it. When you're drinking moderately, the cube flashes green in time with the ambient music. If you start drinking more quickly it moves to amber, and red is your final warning.

The augmented-reality diet
Researchers in Tokyo found that using headsets to make food look one and a half times bigger led to a 10% decrease in consumption. Cue Google Glass designers jostling to create the ultimate diet app.

Telltale teeth
For those who think Google Glass seems intrusive, a sensor embedded in a molar is the stuff of nightmares. Developed by Taiwanese scientists, it can tell when you're eating, drinking, smoking and coughing. "All of this data can be sent to your doctor or dentist to provide an accurate picture of your daily consumption habits," says Tessa Mansfield of Stylus. "On a more alarming note," she adds, "could this information be shared with our insurance companies?"

3D printing
The exquisite geometric sculptures created by The Sugar Lab are the shape of confectionary to come, as the 3D-printing trend takes off.

Laser cutting
Designer Andrew Stellitano engraves ham, laser-cuts biscuits into Louis Vuitton logos and makes topographic art out of lasagne. It is all rather beautiful, in an unnaturally perfect sort of way. Meanwhile IDEO, a design firm, has used a laser to write on a pork chop for a poster campaign.

Food tattoos
A Spanish company has developed laser tattoos for fresh produce, which can safely apply logos, provenance details and even QR codes on to fruit and veg. So long, irritating and un-eco stickers.

Kale lollies
Nothing, it seems, can stop the march of the kale evangelists. Next summer, forget Magnums - it's all about the kale ice lolly.

Chia pods
Chia, an ancient grain that is favoured by vegan raw foodists as a great source of protein, omega-3, fibre and slow-release carbohydrate, has been morphed into a snack food. Mixed with coconut milk and fruit, it comes in a dinky "pod" with a spoon. Expect to see more chia products for "on-the-go nutrition", as Stylus's Mandy Saven puts it.

Egg-white crisps
IPS (Intelligent Protein Snacks) contain protein, half the fat of regular crisps and fewer carbs, too. No mention of salt levels, though.

Savoury yoghurts
Carrot, tomato, parsnip and beetroot yogurts are a thing in New York. Milk from grass-fed cows and naturally sweet vegetables seem a winning combination - it can't be long before it comes to the UK.

Coffee fruit
"In the quest to find the next superfood," says Saven, "many food buyers are looking to lesser-known and exotic varieties of fresh produce." Step forward coffee fruit (what we know as coffee beans are actually the seeds inside these berries), which is found in products such as the health drink Bai.

Insect bars
Chapul protein bars have introduced the notion of insect-eating to America. They contain 15% more iron than spinach and as much B12 as salmon, and the insects are disguised by other ingredients including chocolate, coffee, coconut and ginger.

Edible wood
A Chinese scientist seeking to address future world food shortages has discovered how to make the carbohydrate amylose from wood. It is very complicated and expensive to produce just now, but give it 10 years ...

Edible soil
Yes, chefs such as René Redzepi and Heston Blumenthal have been fashioning delicious foodstuffs into fake soil for years, but we're talking actual earth. Last year, the Tokyo restaurant Ne Quittez Pas introduced a soil-based menu, including dirt and potato soup, dirt risotto with sea bass and dirt ice-cream. According to Yoshihiro Narisawa, a chef from another Tokyo restaurant, soil is rich in umami. This could catch on.