For a Better Caesar, Get Kale Into the Mix 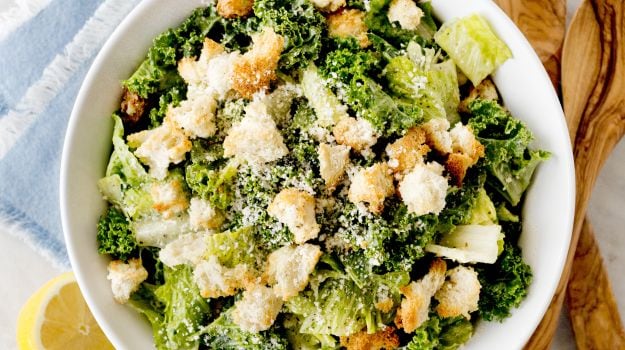 The Caesar, done right, is a multiplatform salad. Beyond the taste of the thing — which is spectacular — it is experienced across all the senses, a riot of contrasts, cold and crunch.

Sadly, it’s rare to find a Caesar on the open market that gets even a couple of those elements right. So many atrocities are presented under that name: baby greens suffocated under an avalanche of fake cheese; wilting spinach leaves drowned in milk-bland dressing; innocent romaine crammed into plastic containers with unspeakable proteins.

That’s why a perfect Caesar is the one you make at home. And our favorite modern version is one with more greens going for it than romaine. Romaine has become the standard choice, and it’s a fine one, but the original formula called for strong, bitter leaves to stand up to the rich, salty dressing.

In a 1947 report about the flaring popularity of Caesar salad in California, The New York Times’ Los Angeles bureau chief, Gladwin Hill, wrote to the newspaper’s food editor, Jane Nickerson, in New York. “The fundamentals are one or more flavorsome greens like romaine, endive, or escarole,” he wrote. “Bland lettuce is not permitted.”

So don’t worry that piling raw kale into a Caesar salad is painfully trendy. It’s practically a conservative choice. And another great benefit of using sturdy greens: The salad can be dressed and seasoned hours before serving and returned to the refrigerator, with no fear of the Total Salad Breakdown that would happen if you tried the same shortcut with most green salads.But even the staunchest lovers of strong greens can find an all-kale salad too bitter. (This is why so many kale salads are garnished with rich avocado, sweet dried cranberries, toasted almonds and the like.)

Our preferred solution is to balance the kale with other greens, making the salad juicier and brighter. The combination of forest-green lacinato kale and mint-green romaine gives great visual contrast. Pale yellow hearts of escarole tossed with kelly-green curly kale would be beautiful on another day.

At Acme, the recently rebooted bistro in NoHo, chef Brian Loiacono goes full brassica in his Caesar salad, combining coins of Tuscan kale with shaved-to-order brussels sprouts. “Once you have a good strong dressing, you can use greens you wouldn’t think about for salad,” he said. Letting the salad sit after tossing, he said, even for a few minutes, helps soften and season the leaves.

Any kind of kale will work; it’s only a question of how small to cut it. Tougher, bumpy-leaved types, like lacinato kale (also known as dinosaur or Tuscan kale), should be about the size of a postage stamp. Curly kale can be as big as a business card.

There is no need to “massage” the kale to tenderize it; the lemon in the dressing and time in the refrigerator will take care of that.

This recipe will certainly work without kale, but it won’t work with, say, Bibb lettuce or mesclun. Tender salad greens like those will sink under the weight of Caesar dressing, but kale gives back as good as it gets.

If using romaine, leave all but the biggest, floppiest leaves whole. Whole leaves and spears give the salad the most crunch. (Caesar salad should always be served with a knife and fork.)

Once you have your greens picked out, swish them clean in a giant bowl or a sink full of very cold water. A few ice cubes aren’t a bad idea; the cold water helps stiffen any greens thinking of wilting. This is best done several hours or a day ahead to give the leaves the chance to dry completely.

Loiacono washes them the night before in ice water, and lays each leaf on a towel-lined tray before refrigerating overnight. (Access to giant refrigerators is one of the tricks that help chefs seem like better cooks than the rest of us.)

I dry them in tea towels, then put them in a deep bowl, with a bag of ice in the bottom and another one lying on top, to get the leaves really cold.

For the dressing, as long as the fundamental ingredients are all present — garlic, Parmesan, lemon, Worcestershire sauce or anchovies, olive oil, black pepper and mustard (not part of the original recipe, but helpful for flavor and emulsification) — the proportions should be adjusted to your liking. Taste as you go: The original Caesar salad, like steak tartare and guacamole, was mixed tableside to the customer’s taste.

There is one stipulation: In the end, your dressing should be salty, creamy, tart and spicy — an element that often gets lost in restaurants, where Caesars are ever more timid. In the classic dressing, the mustard is eye-wateringly spicy; the raw garlic is mouth-scouringly spicy; the freshly ground black pepper is sneeze-inducingly spicy. It is not a straightforward chile heat, but a layered one, assaulting all the senses.

And all that heat is balanced with lashings of rich oil, cheese and egg, giving the salad its distinctive mouthfeel and flavor.

Caesar Cardini, the glamorous Italian-American restaurateur who popularized the salad from his Prohibition-era outpost in Tijuana, Mexico, could not have known it, but much of the appeal of his namesake salad comes from umami. The “fifth taste,” umami, is the mouthfilling, savory flavor first identified by Japanese scientists in the early 20th century, then quickly synthesized into the additive monosodium glutamate.

Long before any chef in the Western Hemisphere had considered umami, Cardini’s salad was a powerful, natural delivery system for it, via Parmesan, Worcestershire sauce and garlic.

Even without that knowledge, the Caesar catapulted to fame in the 1930s, talked up by salad-mad Californians who traveled to Tijuana to score a gin martini and a Caesar — to this day, one of the world’s great pairings. And by 1947, Hill reported, the Caesar was being extolled in Los Angeles as “possibly the greatest advance in salad fabrication in centuries.”

Could the half-kale, half-romaine Caesar be the next benchmark in that glorious tradition?

4 ounces freshly grated Parmesan, plus an extra chunk for serving

1. Make the croutons: Heat oven to 400 degrees. Pull the soft bread out of the center of the loaf, leaving the crust behind, and tear the soft bread into bite-size pieces. You should have about 3 cups. Spread pieces on a rimmed baking sheet and bake for about 12 minutes, until golden and crisp. Let cool.

2. Prepare the kale: One large leaf at a time, use the tip of a small, sharp knife to cut along the sides of the tough center ribs. (Or, use your fingers to pull the leaves off the rib.) Pull out the rib and discard. When all leaves are trimmed, cut into bite-size pieces. (Do not shred.)

4. Fill a sink or salad spinner with very cold water and submerge the leaves. Swish and let soak 5 to 10 minutes. Working in batches, lift out and drain on a kitchen towel, then dry in a salad spinner.

5. Place a plastic bag filled with ice in the bottom of a salad bowl. Pile the washed leaves on top, cover with a damp kitchen towel and refrigerate until ready to serve.

6. In a blender (or using a hand blender), combine the garlic, anchovies, mustard, a large pinch of salt, about a dozen grinds of black pepper, olive oil and lemon juice. Blend until smooth.

7. Cook the egg: Poach in simmering water or in a microwave, until yolk is thickened but still runny. (To poach in a microwave, break egg into a glass bowl or measuring cup. Gently pour in warm water to cover the egg by about 1/2 inch. In bursts of 30 seconds or less, depending on microwave power, cook egg until white is just firm and yolk is thickened. Hold a slotted spoon over the sink and pour the egg and water into it, so the cooked egg is held in the spoon while the cooking water and any uncooked whites drain off.) Put the egg in the dressing and blend.

8. Taste and adjust the seasonings with mustard, oil, lemon, salt and pepper. It should be pungent and sharp but not acidic. Blend again, transfer to a container with a tightfitting lid, and chill until ready to use.

9. When ready to serve (or up to 2 hours beforehand), remove towel and ice from the bowl and fluff the greens. (If necessary, transfer to a larger bowl; you will need plenty of room for tossing.) Shake the dressing. To the greens, add half the croutons, half the dressing and half the cheese and toss well. Taste and toss with remaining dressing as needed. (If necessary, transfer the tossed salad back to the salad bowl.) Add remaining croutons. Sprinkle remaining grated cheese over the top and grind coarse pepper over that. Serve immediately (or refrigerate for up to 2 hours). Toss once more at the table.