For the Weight Watchers - Cheesecakes Made Low Fat 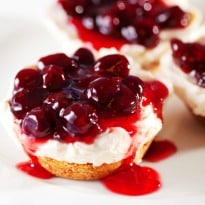 The cheesecake is a decadent, deliciously smooth and creamy dessert often laced with colorful fruits such as strawberries, blueberries , mangoes, kiwis or a medley of fruits. In my opinion, cheesecake is the most elegant way to end a meal and if being a sweet-toothed person I have my way, it could also be the best way to begin with.

No wonder why people have been perfecting the cheesecake recipe since centuries. A variety of cheeses like Ricotta cheese, Philadelphia cheese or Quark cheese can be used to make the cheesecake.

However much I may want to eat it, my nutritionist always cautions me against the walloping calories in them. Cheesecake cravings can be very uncomfortable if you are on a diet as this special dessert is as fattening as it is appetising. Sometimes, one really wishes that one could have a bit without worrying about the calories cheesecakes pack.

But don't worry. There is some good news for our weight watchers and size zero aspirants. Yes, now you can indulge in your sweet fantasies without much fuss about these unwanted calories as the next best or a better option is hung curd or yoghurt cheesecakes.

This delectable desert is known to have originated in the Greek island of Samos. Physical anthropologists have dated cheese molds there to 2,000 B.C. Many historians believe that cheesecake was served to athletes during the first Olympic Game of 776 B.C. as it was considered a good source of energy. Greek brides and grooms also used cheesecakes as their wedding cakes. A Greek writer named Athenaus is credited with penning the first cheesecake recipe.

The Greek method of making cheese cake is very basic and far from today's complicated methods and recipes. The ingredients - flour, wheat, milk, honey and cheese - were formed into a cake and baked.

Cream cheese was an American addition to this desert.

There are multiple variations to this mouth watering desert. Each region in the world has its own take on the best way of making cheesecake. Truly a scrumptious desert, cheesecake has stood the test of time.

There is a succulent versatility of cheesecake. Once you learn a standard cheesecake recipe, you can amend or modify it in different styles and make it look luscious and delicious each time you make it.

Thus, cheesecake lends itself to a number of variations that extend its reach and universal appeal. As the old saying goes, one first feasts with the eyes before eating. Hence the presentation pays an important part to make the food appealing and palatable. The cheesecake can easily be the showstopper for most dinner tables owing to its elegance and beauty bestowed on it by luscious and colorful fruits, sometimes even nuts, nougats or even chocolate chips.

Although I have written about cheesecake before, this column is dedicated to my friends on diet; so I am going to share the recipe of the hung curd cheesecake.

To make Greek yoghurt, lay a piece of cheesecloth or muslin in a bowl.

Add yoghurt and let it drain by keeping it in a large sieve. Drain the yoghurt for about 1 1/2 hours.

For the crust: Crush the digestive biscuits and add melted butter and brown sugar.

Put the mixture in a nine-inch Springform pan and blend it well with your fingers. Press it on all sides of the pan to form the crust base. Now keep it in a preheated oven (180° C) for 10 minutes.

Once it is brown, take it out from the oven and keep it in the fridge to cool.

To make the filling, combine the strained yoghurt, eggs, sugar, almond essence and blend with a beater or food processor. Add cornstarch, lemon juice and a pinch of salt before blending the mixture again.

Now pour the mixture into the prepared crust and bake at 180° C for 35-40 minutes. Check the cake for firmness. It is done when it's firm on the edges and still a bit shaky in the centre.

Take the cake out of the oven and let it cool in the fridge for at least five hours, preferably overnight. Once it's completely cooled, release the Springform and take the cake out in a serving dish.

Decorate it with sliced fresh mangoes before serving.

Promoted
Listen to the latest songs, only on JioSaavn.com
Ain't the best things in life sweet?


About the Author: Monish Gujral, owner of the Moti Mahal chain, is a restaurateur, chef and food writer.