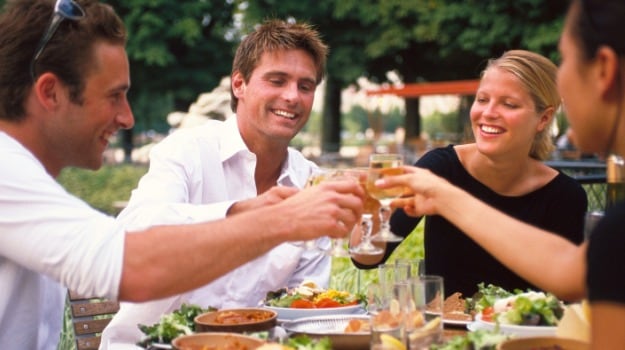 Michelin has a multitude of guides, some focusing on restaurants, others with a range of tourism-related listings.

France, the center of world gastronomy, wants to make its reputation for rude waiters a thing of the past.

More tourists visit France than any country in the world but the country is battling a reputation of giving them less than a warm welcome, especially in restaurants.

French Foreign Minister Laurent Fabius, who is also in charge of tourism planning, on Monday introduced this year's Michelin guide to the country's best restaurants. The gala celebration of French cuisine underlined the message that France aims to cater to visitors who come for the food.

France's Socialist government has promised other changes in hopes tourists will forget the country's decades-long reputation for hauteur. Here's a guide to some of them, along with the latest Michelin stars for gastronomic achievements -

RIDING THE RAILS, SPEAKING IN TONGUES

The Paris Metro is adding other languages especially on the most traveled lines. And visitors can now get multi-day passes that work on subways, buses and suburban train lines. The Paris regional transit is also putting an emphasis on multilingual agents.

France traditionally shuts down on Sunday afternoons, which are considered sacred family time. But legislation is under debate that could potentially expand tourist shopping zones, including the renowned Galeries Lafayette and Printemps, to allow hours more like those already in place on the Champs Elysees.

The phrase means "homemade" - and it's at the heart of what food tourists seek when they arrive to taste France's artisanal cheeses, pastries and other delicacies. With many high-traffic restaurants quietly turning to frozen, prepackaged food, the government passed a measure asking restaurants to highlight their homemade food with the label "fait maison."

GUIDE TO THE THREE-STARS

In the 2015 Michelin guide awards announced recently, Paris alone had nine three-star restaurants, including a new three-star entry, the Pavillon Ledoyen. Its chef, Yannick Alleno, had already received a three-star rating in 2007 for his cooking at the Hotel Le Meurice, which he left in January 2013.

A Savoyard father-and-son team appropriately named Rene and Maxime Meilleur - or 'the best,' in French - took the guide's second new three-star award for their restaurant La Bouitte, which was built in a potato field, according to family lore.

In all, 609 French restaurants received at least one Michelin star this year. "Gastronomy is an important part of France's heritage, as much as our countryside and our monuments," Fabius said in a tweet Monday after the awards ceremony in Paris.

MICHELIN, THEN AND NOW

Michelin was hoping to encourage more road trips - and thus more tire sales - when it started its guide in 1900. At the time, the free book also had listings for gas stations, mechanics and hotels as well as city maps.

Today, Michelin has a multitude of guides, some focusing on restaurants, others with a range of tourism-related listings. The company has expanded to include separate versions for New York City, Tokyo, Hong Kong and Macau.

The latest Michelin guide is bestowing its highest award on two new restaurants, including a renowned Champs-Elysees kitchen whose chef just took charge in July after racking up the triple-star at his previous job.

Paris alone has nine three-star restaurants in the 2015 Michelin guide, including the latest one for the Pavillon Ledoyen. Its chef, Yannick Alleno, had already received a three-star rating in 2007 for his cooking at Hotel Le Meurice, which he left in January 2013.