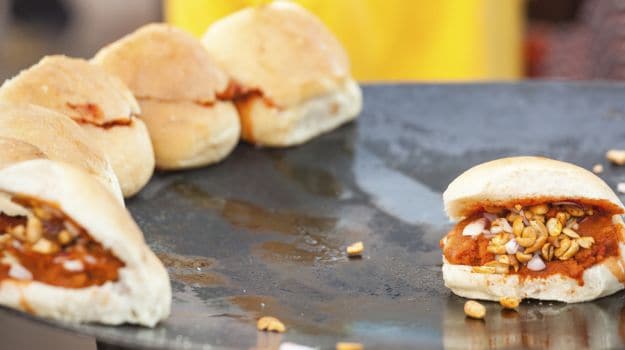 I had gone to Pune on a short trip from Mumbai recently to get a flavour of its eating out landscape. One of the most memorable meals that I had in Pune was in the morning, soon after I landed there. I was at Koregaon Park, which is known as the home to the Osho Commune, where a number of new cafes and restaurants have come up recently. An Instagram friend and fellow foodie, Radhika Dossa, took me to a cafe called the French Window Patisserie. It is a quaint place run by a young patisserie chef named Babita, who bakes some wonderful breads in her cafe.

However, it began to rain as we reached. We parked our car, took our umbrellas and were about to set off to the French Window Patisserie, when I spotted a food cart manned by an elderly Maharashtrian couple, Khandu and his wife Nanda, selling misal pao. I saw a couple of folks eating misal, which is a local favourite, so I also jumped in and joined them. The piping hot misal was made of sprouts and a beans-based spicy red curry, topped with crunchy farsan and teamed with a soft pav. Having such a delectable dish, with the rains pouring by, was just what the doctor had ordered. Even though we had breakfast waiting at the cafe next door, I couldn't stop myself from having a plate of hot and steaming pohe, topped with sev. Finally, as I got ready to leave, I saw Nanda ji add green cardamoms and sliced fresh ginger to the chai brewing on her stove. The tea went perfectly with the weather and I wondered why Mumbaikars ran after places such as Khandala, Lonavla, Alibag and Goa during the rains. With the Mumbai-Pune Expressway connecting the two, Pune makes for the perfect monsoon getaway for Mumbaikars in my opinion, with its abundant greenery on offer and ample food too.

I later learnt that carts such as Khandu and Nanda's are called gaaris that dot the city of Pune and form an integral part of the socio-cultural landscape of this beautiful city which was once known as a sleeping beauty. The city now seems to be in a hurry to change.

I went to one of the most famous gaaris of Pune later that evening. This is parked beside the Jamsetji Jejeebhoy Agiary, the largest Parsi fire temple, located at the Cantonment area (in memory of the British army camp that existed here before India's Independence). There was a Parsi settlement here too, and as a result, there are a number of Irani places in the vicinity like Dorabjee & Sons, the oldest running restaurant of Pune (estd. 1878); Cafe Yezdan, where bookies come to compare notes over chai and bun maska; and the Husseny Bakery (estd. 1932), which supplies breads to cafes like these and is a firm favourite of locals for its biscuits and bakes.

However, the real crowd puller here is the Garden Vada Pav cart (est. 1972). I came here with Jayesh Paranjape, a Pune local and travel expert, during a food walk that he had curated. Jayesh told me that he has been coming to this vada pao cart since he was a kid and still drops in, even though he now lives 20 kms away. The batata vada patty here is flatter than the round batata vadas of Mumbai, and less spicy too. The idea is for the vada to cover the surface of the pav, and hence, the shape, said Jayesh. He added that the 'original' Punekars have a mild palate for spice, hence, the lower chilli heat levels in the batata vada.

A new street food hub has emerged in Cantonment, which is located close to Tabooth Street, where Husseny is located. The gaaris here specialise in pizzas, pastas and sandwiches!

The next morning, I went to the city area of Pune and visited restaurants serving Maharashtrian food including a couple that serve misal too. What struck me about both the heritage misal places was their humble origins, and how both are still driven today by the families of their founders. Moreover, just like their founders, they ensure that the food is served at economical prices and with great warmth to people. Jayesh and Neelima Nitin, a Pune based food blogger, accompanied me during my food explorations that day.

Our first stop was Shri Krishna Bhuvan at Tulshibaug, near Budhwar Peth. This eatery was started as a tiny shop in Tulshibaug in 1941 by a gentleman named Yeshwant Joshi. He used to sell puri bhaaji there for the locals who came to shop in the markets here. His son, Sudhakar Joshi, took on the family business and set up a small eatery. Yeshwant Joshi's grandson, Atul S. Joshi, runs the Shri Krishna now. He has converted the place into a two-storied eatery. The ground floor is for takeaways on weekends and the upper floor is where people sit and eat misal and onion bhaaji. Atul's twisted the recipe of their misal a little and now serves a thin red curry with pohe and potato bhaaji, topped with shev, instead of adding sprouts and beans. As is traditional in Pune, he serves misal with sliced bread and not pav.

Pune's most legendary misal shop, Bedekar Tea Stall, is nestled near Narayan Peth. The eatery was started by Dattatreya Bedekar in 1947 as a small tea shop, where he served home-made snacks to his customers. His sons and granddaughter run the place now, which is now a garage-sized eatery and has people queuing up to taste their special misal. The misal sample/kaat (curry) here is hot and sweet and is full of vegetables such as pumpkin and brinjal, topped with crunchy home-made shev. No pulses or sprouts are added here too, which may shock Mumbaikars. If you happen to be here, have Maharashtrian sweets such as laddoos and kharvas with a cup of piping-hot chai. Although, my favourite was the sugary, pastry-based dish called chirotta.

What excited me the most about my short trip to Pune was that while the city acts as a canvas for new eateries, its traditional and humble eateries operating from small street-side stalls or hole-in-the-wall joints are thriving too, and are treated with reverence even by the youth. That's always a good sign of a thriving food culture!