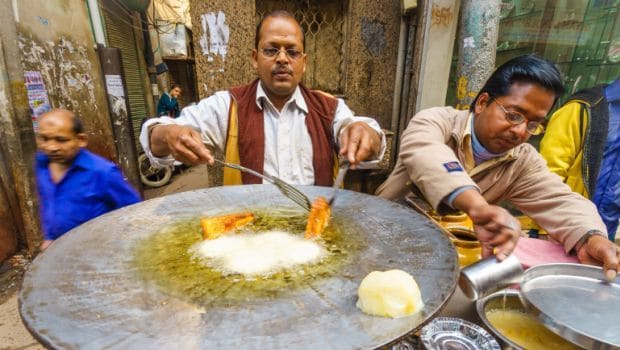 Highlights
Food regulator FSSAI today said it plans to launch a national campaign to give training to street food vendors for improving their hygiene practices and safety standards.

To promote authentic Indian street food, the National Association of Street Vendors of India (NASVI) in partnership with FSSAI is organising a three-day National Street Food Festival to be held at the Jawahar Lal Nehru Stadium in the national capital starting December 23.

More than 300 cuisines from 25 states will be offered by 500 street food vendors from across the country. "We have already trained 20,000 street vendors of Delhi under the project 'Clean Street Food'. We are planning to roll out this programme nationally to train about 15-20 lakh street vendors across the country," Food Safety and Standards Authority of India (FSSAI) CEO Pawan Kumar Agarwal said here.

The FSSAI is seeking support of the state governments as well as corporates to roll out this programme nationally, he added.

In March, the FSSAI had launched 'Clean Street Food' project with an aim to raise the safety standards of foods sold on streets across the national capital by training 20,000 roadside vendors on aspects of health and hygiene. FSSAI partnered with the Ministry of Skill Development & Entrepreneurship to train street food vendors.

Promoted
Listen to the latest songs, only on JioSaavn.com
Taking about the festival, Agarwal said more than 50,000 people are expected to attend the eighth edition of this festival and digital payment facility would also be available. "There will be lot of education, fun and entertainment activities during this street food festival," he said. Agarwal said the FSSAI would also showcase the benefits of fortified food during this festival.

"In its 8th edition now , the National Street Food Festival has succeeded in advocating space for street vendors in Indian cities and also driving home to the vendors the need and benefit of serving hygienic and safe food," said Arbind Singh, National Coordinator, NASVI.