Galouti Kebab: The Melt-in-the Mouth Delicacy Originally Made for a Toothless King

The legend goes that the Nawab had lost most of his dentures due to old age, but his penchant for kebabs were far from dying. So for their toothless Nawab, the seasoned khansamas came up with a popular variant which needed no chewing yet had the same rich flavours and taste of a kebab. 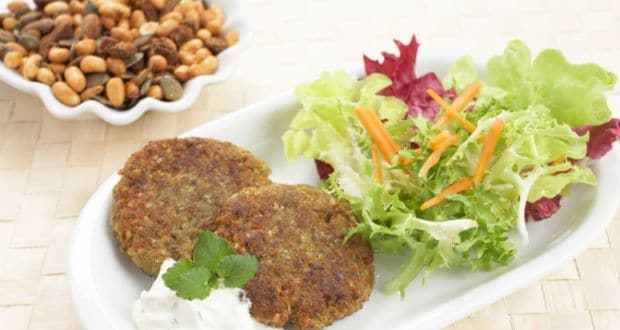 What more can be said of Lucknow that has not been spoken about already? Braving the test of time, the city still manages to preserve its rich royal heritage be it through its architecture, literature, 'khatirdari' (hospitality) or food. The rich Mughlai cuisine with aromatic spices is a major contributor to the city's old world charm. The birthplace of several delicacies like Lucknawi Biryani, Moti Pulao, Parind Puri and Arvi ka Salan, Lucknow is most famous for its meaty kebab delicacies like Patili Kabab, Tunday Kebabs, Galouti Kebabs etc. These mouth-melting kebabs have chronicles of their own, worthy to be told and savoured. And one such chronicle is that of the invention of the famous Galaouti Kebab.

Kebabs were a common fixture in both, royal dining as well as commoner's household during 13th century A.D, were it was enjoyed as breakfast along with naan, a tradition that can be seen even today. But until 16th century, kebabs were quite chewy and hard in texture, which was soon to change with the coming of Nawab Asa-ud-Daula.

The Nawabs of Lucknow were men of taste. They were as serious about their indulgences as their courtly affairs. Nawab Asad-ud-Daula (1748 to 1797), heir of Siraj-ud-Daula, contributed significantly to the culinary culture of Lucknow, with food historians often touting him to bring about a Renaissance in cuisine. It is said that the Nawab was immensely generous in nature, and a common saying around that time was, "Jo Khuda nahi dega, wo Asad dega" (What God won't grant you, Asad would). But by the time Asad came into power, the British had taken hold of the office, leaving the Nawab to spend time on his two passions - his love for grand architecture and good food.

The generous Nawab was so fond of kebabs that he had special orders for his cooks to come up with a new variant of kebab everyday. Even during the time of the Great Famine of 1783, his khansamas were busy creating newer versions of kebabs that were incredibly soft and flavoursome. The kebabs were even served to his court men as well as the labourers who were helping him build his famous architectural marvels like Bada Imambara. The kebabs apparently included one special ingredient or spice each day to bring in a variation, which had the Nawab wondering what it was.

The khansamas also rose to the occasion and explored newer ways of cooking, flavouring and using exotic ingredients like sandalwood, rosebuds, rose, red gensing and pathar ke phool to come up with innovative creations. It is said that the 'shahi mixture' of the said kebabs made use of all these ingredients plus over some whopping 150 exotic spices.

It was during this time of culinary innovation that the Galaouti Kebabs were born. The legend goes that the Nawab had lost most of his dentures due to old age, but his penchant for kebabs were far from dying. So for their toothless Nawab, the seasoned khansamas came up with a popular variant which needed no chewing yet had the same rich flavours and taste of a kebab.

Galouti meant 'soft', something that melts in the mouth, and that was the purpose. It is believed that it was Haji Mohammad Fakr-e-Alam Saheb, the creator of the Moti Pulao, who made the first Galaouti Kebab, and gave the court this creamy, silky, mouth-watering delicacy. Instead of beef, he used the finest cuts of lamb, which was minced finely and to it a tenderiser was added, along with a heavenly mix of over 150 exotic spices to build flavour. The minced meat was then shaped into patties and fried in i for a delectable finish.

Has talks of kebabs got you craving for some? Try making the royal delicacy at home with this recipe -

How to Make Galouti Kebab

1. Marinate the minced meat in the ground ingredients for 4-5 hours.

3. Add to the meat and work at it for some time, almost kneading it like a dough.

4. Shape mixture into round patties of desired size, and refrigerate for half an hour or so.

5. Heat the ghee in a heavy-based frying pan or griddle.

6. Fry the kebabs, browning first one side and then the other, over medium heat.

7. Arrange them on a serving dish, sprinkle lemon juice and serve.