Gelato Sushi: This Dessert Disguised As Sushi Is The Cutest Food On Instagram

Gelato Sushi is frozen bon bons disguised as sushi and is served at Gelarto in New York. 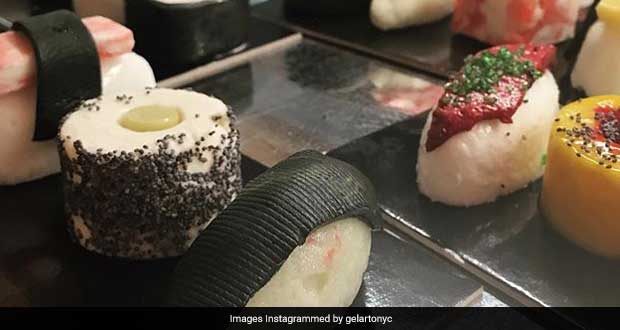 Highlights
Promoted
Listen to the latest songs, only on JioSaavn.com
For sushi lovers, this one might be a bit confusing. We're not here to talk about the Japanese fish preparation that is oh-so popular among seafood lovers, across the world. We're here to talk about a frozen dessert that is disguised as the sushi and has been creating a stir on social media lately. The gelato sushi is a delightful bite-sized dessert that looks exactly like a sushi, but tastes nothing like it (thankfully!).

Although the dish sounds horrible, (no one's asking for ice-cream with raw fish in it!) it's basically frozen bon bons made to look like sushi and served on a sushi platter. The dish is one of those disguised foods that we have seen plenty of, all throughout 2017. The little treats can easily pass off as regular sushi, until you take a bite of it and realize that they're actually desserts.

The dessert was introduced by a dessert shop called Gelarto in East village in New York and have since become wildly popular on Instagram. Gelato sushi has become one of the most highly sold desserts at the shop. A whole platter of these masked treats is priced at $12 and is served with chocolate dips, instead of soy sauce, complete with chopsticks.

The treats are available in a variety of flavors including mango and coconut. The gelato sushi isn't the only quirky sweet treat on Gelarto's menu. They also have something called the 'brioche waffle hybrid sandwich', which is as interesting as it sounds. It has a brioche bun toasted like a waffle, stuffed with your favorite ice-cream flavour and served with a dollop of fresh whipped cream. They also have amazing customized gelato cakes and ice-cream in a range of flavors like pistachio, key lime, cinnamon, apple pie, etc.

All ice-cream lovers should bookmark this page for when you visit New York next. This one's too good to pass up on!