Gujarati Recipes From Uganda - Yes, You Read That Right 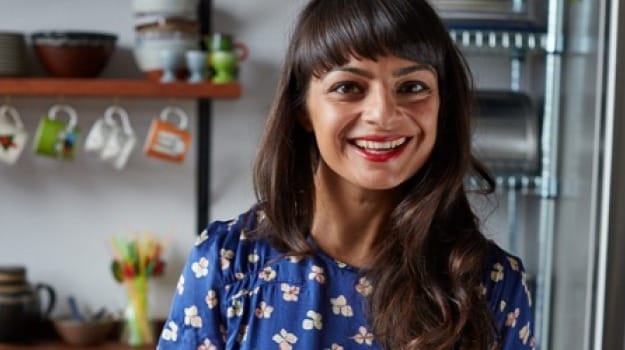 Meera Sodha continues her culinary history by exploring her Ugandan heritage, recalling how her resourceful grandparents adapted Gujarati techniques to new African ingredients like this fish with corn roti and unripe mango.

When he was a young man my grandfather, Mathuradas, detested both snakes and working in the family timber business. Then, one day, shortly after his 20th birthday, a snake fell on to his neck in the timber yard. He shot it dead and quit the family business to go and make something of himself. It was that simple.

He was hot-headed, hungry, entrepreneurial and eager to succeed. The British government were seeking people exactly like him and his brother to go to African colonies to bolster the economy and boost business. Together with my grandmother, he left everything behind to set up a new life in Uganda: the land of opportunity.

He wasn't the only one. Thousands of Indians, especially Gujaratis, migrated there. They worked hard and prospered. My grandfather set up a printing press, a Coca-Cola bottling factory and an orange juice factory (with the brothers who would go on to set up Tilda rice) along with many emporiums that sold cotton and soap.

With his newfound wealth he employed a cook, Sufriano, who would often bring home a goat from the market, piles of kanga birds (similar to quails), mountains of amaranth leaves, sweetcorn or plantains. Mathuradas would even stop off by the Nile and buy some fish to bring home. He hadn't been able to get many of these foods in Gujarat, but here he bought as much as Sufriano, the cook, could manage.

For the most part my grandmother, who learned Swahili, taught Sufriano to apply her family recipes to local produce. There are stories of antelope covered in a paste of comforting Gujarati spices, wrapped in banana leaves and slowly baked in the earth overnight, of kanga birds marinated in turmeric and eaten fresh off the grill, of hot fried cassava chips doused in lemon, chilli and salt, and delicate peanut and chicken stews.

Growing up, my mother often ate at her Ugandan friends' houses or from the street stalls. Sometimes she'd eat mishkaki (gingery chicken kebabs), barazi (pigeon peas in coconut sauce) or fried tilapia fish with ugali (maize). She even remembers a rolex: an egg cooked into a chapati with mince or vegetables rolled into it.Then, suddenly, their life in Uganda ended. President Idi Amin decided one morning that all Ugandan Indians had to leave the country within 90 days, handing over money, businesses, houses - or he'd start to kill them.

The British government chartered emergency planes from Entebbe airport. My grandparents, mum and her brothers landed at Stansted with just one suitcase between all five of them and £50 with which to start another new life. Their dreams had been broken, they'd lost everything my grandfather had built up over 20 years. But now they were in England, and they would never look back.

Mum and Dad (also Ugandan Asian) never really talked about their time in Uganda; cooking and eating Ugandan dishes was the only reminder of their childhoods. Even then, the stories didn't flow freely. I'd have to ask my Mum little questions about what grew in the garden, or how Sufriano's fish tasted, in order to open a little window into her youth. Slowly, she'd start to tell me about a lost world: how she'd wait in the dark for hours without moving for a pack of lions to move on..

I realise now that although there were no physical reminders left of their time in Uganda: no buildings, mementos or even old Ugandan friends, their memories, stories and recipes remain more valuable to them than anything material could have been. No dictator could ever take the recipes away.

Because Indians were in Uganda for so many years there was a merging of ingredients, techniques and cuisines. Both have left an indelible mark on each other's cooking and they now share many dishes. These days, when it comes to my own cooking, Uganda influences me greatly. Sometimes, I cook dishes based on the stories Mum tells me about their little Indian kitchen in Uganda.

This recipe is based on my mother's description of how Sufriano used to cook the fish my grandfather bought from fishermen on the Nile. The tasty marinade will work with most white fish. You'll need a grill pan for the fish and a 10-12 cm round bowl, mug or pastry cutter for the rotis.

For the mango relish

A pinch of chilli powder

1 With a sharp knife make 2 or 3 diagonal slits on each side of the fish. Whisk together all of the marinade ingredients in a bowl, then rub the mix into the slits. Leave to marinate in the fridge for at least 20 minutes and up to a few hours.

2 Next, make the mango relish. Peel the skin off the mango with a vegetable peeler. Chop into large chunks then grate the flesh into a bowl. Add the sugar, salt, lemon juice and chilli powder then mix. Leave to one side. (Mix the corianderin just before serving.)

3 To make the corn roti mix you'll need 140ml hot water. For the roti, mix 70ml cold water with 70ml boiling water and leave in a jug to one side. Next, add the cornmeal, flour and salt together in a bowl and mix.

4 Next, add 1 tbsp oil and rub through with your fingers until it resembles fine breadcrumbs. Add the chilli and ginger and then, bit by bit, add the water (you might not need it all) into the mixture until it becomes a and soft, pliable dough.

5 Take half of the dough and roll it out on to a floured surface to 5mm thick. Take a 10cm bowl, a large mug or small plate, turn upside down and press into the dough to create discs. Do the same with the other half of the dough.

6 To cook the roti, heat a frying pan over a high heat, drizzle a little oil into the pan and cook 2-3 roti at a time for around 3 minutes, turning every minute or so until cooked through. Wrap in foil to keep warm and leave to one side.

7 To cook the fish, heat the grill pan until smoking hot, then reduce to medium. Add two fish at a time to the pan and spoon a little of the marinade on top. Leave to cook for 4 minutes on one side, then flip and cook for 4 minutes on the other. Remove carefully and fry the other two fish. Serve at once with the relish and roti encouraging people to get stuck in with their hands.

Meera Sodha is the author of Made in India: Cooked in Britain (Figtree)