Happy Birthday Saif Ali Khan: 6 Fitness and Diet Tips You Can Steal From The Actor

Actor Saif Ali Khan is celebrating his 48th birthday today. The actor rang in the celebrations with his family in Mumbai. 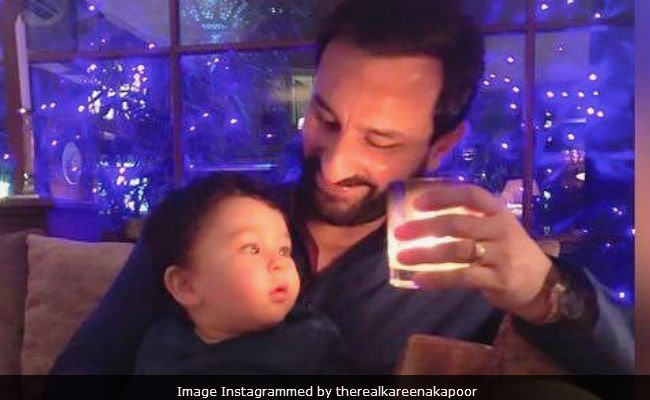 Actor Saif Ali Khan is celebrating his 48th birthday today. The actor rang in the celebrations with his family in Mumbai. Kareena Kapoor Khan, Karisma Kapoor, Soha Ali Khan, Kunal Kemmu, Sara Ali Khan and Saif's son Ibrahim were all present in the Chote Nawab's midnight birthday bash. Actress Karisma Kapoor also posted the picture of the much awaited birthday cake, which is one of the best celebrity birthday cakes we have seen this year. Loaded with chocolates of all kinds, from hazelnut chocolate and caramel to the crispy wafer ones, this delicious cake is every chocolate lover's dream come true. See it for yourself! (And do not miss the adorable cake topper that reads 'We Love You Saifu' too)
Saif, who was last seen in Netflix's original 'Sacred Games', won both mass and critical acclaim for his part as 'Inspector Sartaj Singh'. His role, as an honest troubled cop trying to save the city, has got the entire nation hooked. The next season of 'Sacred Games' is expected to come next year.

As far as Bollywood is concerned, Saif would be seen in 'Bazaar' written by Nikhil Advani. There were rumours about him playing the antagonist in Ajay Devgn's next 'Taanaji: The Unsung Warrior' too.

Saif Ali Khan, who stepped foot in the industry in the year 1992, has emerged to be one of the most sought after actors of Bollywood. With blockbusters like 'Hum Tum', 'Omkara', 'Kal Ho Na Ho', 'Dil Chahta Hai' and 'Love Aaj Kal' to his credit, Saif Ali Khan also became one of the first big league actors to foray in the realm of web series.

From choosing the most unconventional roles to his impeccable style sense and fine acting chops, Saif Ali Khan makes sure he is never out of media's limelight. At 48, Saif Ali Khan is inarguably one of the fittest actors in town too.  Here are some steal-worthy secrets you can put to use.

#His Love For Yoga

You would be surprised to know that Saif practices yoga because of wife Kareena Kapoor's penchant for the ancient discipline. Yoga is an intrinsic part of both Saif and Kareena's fitness regimen. Saif hits the gym too and his regimen is largely dependent upon his projects. He changes his regime depending upon the role he is playing. He starts his regimen with light warm-ups, which is followed by stretching and skipping.

#Pressed For Time? Go For A Walk

In his interview to a leading film magazine, Saif has mentioned how walking has become an indispensable part of his fitness routine. Whenever he is pressed for time, he goes for a good round of walk, which also works as great stress buster for the actor. Saif also enjoys playing sports. Media has often caught him after his squash and tennis sessions with children, Sara and Ibrahim.

#Know The Importance Of Food

Actor Saif Ali Khan, who was present at the launch of nutritionist Rujuta Diwekar's new book 'Indian Super Foods: Change The Way You Eat' in Mumbai, revealed that people today often have many misconceptions about dieting. They equate it to not eating, which is not the right way to go about things. You can eat food you like and still feel great about it. Moreover, you can lose weight at the same time. In fact, the best thing about eating the right kind of food is that you mentally feel good about it, which eventually improves the quality of your life.

#Also Know When To Stop

In his Nutritionist Rujuta Diwekar's documentary Indian Food Wisdom & Art of Eating Right, Saif revealed the importance of having a sense of control, not just in the diet but in our minds. "Something like stop eating just before you get full. And, that's the most difficult time to stop eating. You have to know that even if you don't feel it."

#Be True To Your Schedule

Saif also understands the value of sticking to one's routine. His gym and yoga sessions and meal timings should be on point. He knows when he feels cranky before the gym, it could be because of the fact that he has not eaten well or eaten on time. He is much calmer when things are in place, Saif revealed in the documentary.

Here's wishing Saif a very happy birthday! May you get to enjoy all your favourite treats for the day!